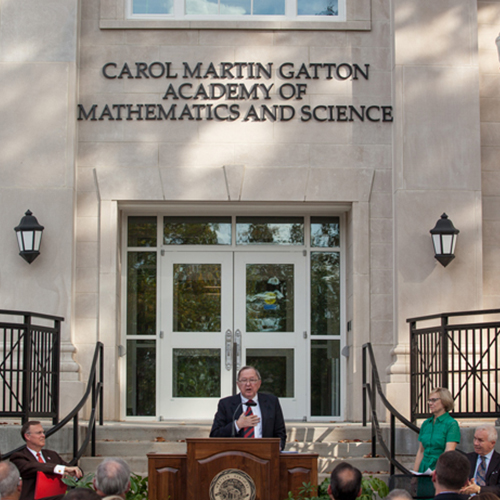 After a 15-month hiatus from Florence Schneider Hall, The Carol Martin Gatton Academy of Mathematics and Science in Kentucky has returned to its former home following the expansion and renovation of the building.

The expansion and renovation of the building was funded completely from private gifts, with the lead gift coming from the school’s namesake, Carol Martin “Bill” Gatton.

“Before we agreed to it (the funding), we got a list from the 13 states that had a school like this, and we called every one of them. Without exception, they just couldn’t get over bragging about not only what it did for their students, but what it did for their state,” Gatton said. “It’s economic development for the state of Kentucky. There is nothing that goes on that doesn’t help the state attracting new industry and attracting other growth entities because the Academy of Math and Science is in Bowling Green.”

In honor of his family, each wing will bear the name of Gatton’s parents: the Harry W. Gatton Sr. Wing and the Edith Martin Gatton Wing. In addition to The Academy gift, he made scholarship donations honoring his brother, Charles, and his sister, Marie, whom he believes lived in Schneider Hall when she attended WKU in the 1920s.

Gatton shared a poem The Bridge Builder by Will Allen Dromgoole that tells the story of an old man who builds a bridge over a deep chasm even though he will not benefit from it. He built it for the “youth whose feet must pass this way.”

Pete Mahurin, friend to both The Center for Gifted Studies and The Gatton Academy, commented: “I’ve never known a better bridge builder than Bill Gatton.”

WKU President Gary A. Ransdell emphasized the importance of the gift that helped create The Gatton Academy to the crowd of students, parents, WKU faculty and staff, and community members who attended the ceremony.

“The importance of The Gatton Academy to Kentucky cannot be overestimated,” Dr. Ransdell said. “What we are doing to allow gifted and talented high school juniors and seniors to achieve their full intellectual potential in a cohesive environment where they challenge each other and they thrive and play off each other as they study and work on this campus bodes well for the state of Kentucky. And the final analysis, as those in the General Assembly well know over the years, is an economic strategy for the Commonwealth.”

Dr. Julia Roberts, Executive Director of both The Gatton Academy and The Center for Gifted Studies, has been advocating for the needs of gifted students, like those who will benefit from the expansion, for nearly four decades.

“Way back in 1997 when Dr. Charles McGruder and I wrote the first proposal for an academy, I dreamed of 200 Kentucky students spending their last two years of high school engaged in college-level study,” Dr. Roberts said. “The expansion of Florence Schneider Hall has allowed that dream to come true as we now have that capacity, allowing the class of 2018 to be the first class to have the enhanced number of students.”

The main focus of the addition was to add 38 new bedrooms to allow for The Gatton Academy’s capacity to grow to 200 students. The additional rooms were not the only additions however. The Great Hall, which is located on the second floor, is a multipurpose room that can seat all 200 students for classes or events. The primary use for The Great Hall is for quiet from 9 a.m. to 10 p.m. most days. The addition of this room has allowed the original multipurpose room on the fourth floor to become a dedicated recreation space called “The Den.”

While this physical expansion of the building will allow for more students to attend, the overall quality of The Gatton Academy has increased with the new building.

“A great deal of thought, reflection and planning have gone into the preparation for our expansion,” said Dr. Lynette Breedlove, Director of The Gatton Academy. “We have reviewed our practices and policies to ensure they optimize student and staff resources. We have expanded our staff to ensure students continue to receive the support for which Gatton is known and to continue to provide the community and family feeling our alumni value.

“In addition, we have carefully thought about the physical additions and renovations of the space. The students have bright, vibrant spaces in which to collaborate and spend their recreational time, as well as beautiful, comfortable spaces in which to study. The expansion is benefitting our students in numerous ways.”

With the completion of The Gatton Academy’s Class of 2019 in April 2017, the total enrollment will reach approximately 190 students.