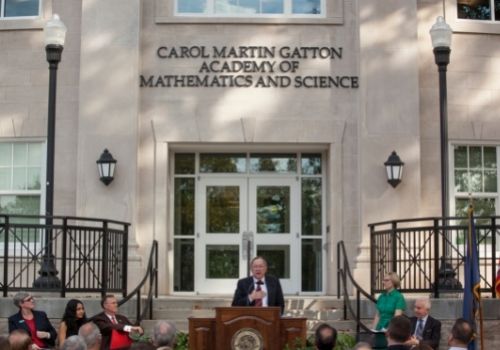 Carol Martin “Bill” Gatton, the businessman and philanthropist after whom our program is named, passed away on April 18, 2022, at 89 years old. Mr. Gatton’s generosity made The Gatton Academy’s founding and subsequent expansion possible. His initial gift in 2007 established an endowment that continues to fund students’ opportunities to participate in intensive research experiences each summer, as well as funding needs-based study abroad scholarship. His second gift, and the gifts he inspired from others, funded the renovation of Florence Schneider Hall to serve up to 200 students, an increase of 80 beds. The Edith Martin Gatton and Harry W. Gatton, Sr. wings were dedicated in 2015 in honor of Mr. Gatton’s parents.

Since opening our doors in 2007, The Gatton Academy has served 1,251 students from 117 of Kentucky’s 120 counties, giving students the opportunity to pursue their STEM-related interests through classes at Western Kentucky University while living in a supportive residential environment designed specifically for them. While state funding provides students scholarships for tuition, housing, and meals, individual donors such as Mr. Gatton ensure students have access to high quality enrichment experiences during their two years in the program.

Mr. Gatton recognized the importance of investing in Kentucky’s future by providing paths for equitable education. “Mr. Gatton’s gift has left a living legacy through opportunities he made possible for our students. Not only has he directly impacted the lives of Gatton Academy students, but his investment in Gatton inspired the establishment of other specialized STEM programs in schools across the Commonwealth,” noted Dr. Lynette Breedlove, Director of The Gatton Academy. “Mr. Gatton’s life and philanthropy serves as a positive model for our students, illustrating the ripple effects of investing in young people.”

Each time Mr. Gatton visited The Gatton Academy, he read a poem called “The Bridge Builder” by Will Allen Dromgoole, which highlighted his altruistic mindset and dedication to Gatton’s students. The poem is on permanent display in Florence Schneider Hall along with photos of Mr. Gatton, his parents, and both building dedication ceremonies. Dr. Julia Roberts, Executive Director of The Gatton Academy, remarked that “Mr. C. M. (Bill) Gatton’s dedication and generosity have continued throughout his lifetime. He has been the one who created the bridge for those who came before him. He will be missed by many, including staff and students at the Gatton Academy.”

Came, at the evening cold and gray,

To a chasm vast and deep and wide.

Through which was flowing a sullen tide

The old man crossed in the twilight dim,

The sullen stream had no fear for him;

But he turned when safe on the other side

And built a bridge to span the tide.

“You are wasting your strength with building here.

Your journey will end with the ending day,

You never again will pass this way;

Why build this bridge at evening tide?”

“Good friend, in the path I have come,” he said,

“There followeth after me to-day

A youth whose feet must pass this way.

This chasm that has been as naught to me

To that fair-haired youth may a pitfall be;

He, too, must cross in the twilight dim;

Good friend, I am building this bridge for him!”

Funeral arrangements for Mr. Gatton have not been announced at this time.

On Saturday, May 7th, The Gatton Academy of Mathematics and Science graduated 77 students from across Kentucky in their fifteenth graduating class.

Gatton Academy of Mathematics and Science in Kentucky senior Allen Lin (’22, Larry A. Ryle HS) has received the competitive Gates Scholarship, a program funding only 300 students per year for the full cost of attendance not already covered by other fin

Carol Martin “Bill” Gatton, the businessman and philanthropist after whom our program is named, passed away on April 18, 2022, at 89 years old. Mr. Gatton’s generosity made The Gatton Academy’s founding and subsequent expansion possible. His init