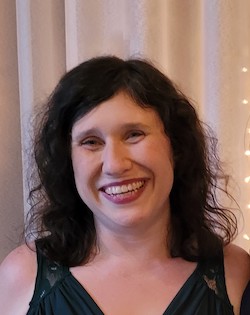 Dr. Michelle Dvoskin holds a BA in Theatre & Dance and Women’s & Gender Studies from Amherst College and an MA and PhD in Performance as Public Practice (Theatre History & Criticism) from the University of Texas at Austin. Her primary research interests lie at the intersections of musical theatre, queer theory and performance, and feminist theory and performance. She has been published in The Oxford Handbook of American Drama, The Oxford Handbook of the American Musical, Studies in Musical Theatre, The Journal of American Drama and Theatre, and Broadway: An Encyclopedia of Theater and American Culture. She is also the co-author of an essay in the forthcoming Troubling Traditions: Canonicity, Theatre, and Performance in the US (Routledge). She is a member of Phi Beta Kappa and the Association for Theatre in Higher Education.

Michelle directs regularly on the WKU mainstage, where some highlights have included Stop Kiss, Crimes of the Heart, Into the Woods, These Shining Lives, and Hair. She is the founder and faculty artistic director of the WKU Department of Theatre & Dance’s biennial New Works Festival, which features over a dozen new performance works created entirely by students. Michelle is also the dramaturgy mentor for the department.

If Michelle’s in the building, her door is probably open – come in and share pictures of cats (she has two), nerd out about theatre (or tv or books or anything, really), and grab a snack from the drawer (or some M&Ms from the dispenser in her office that she keeps full because sometimes? People need chocolate).