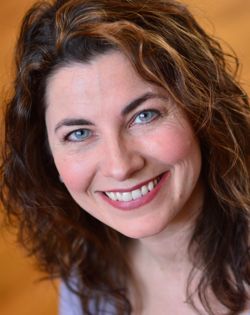 Julie Lyn Barber is a theatre artist based in the U.S. Midwest. She keeps busy acting, singing, music directing, choreographing, and directing with theatres such as The Richmond Shakespeare Festival, Nettle Creek Players, The Brown County Playhouse, IndyFringe, and The Phoenix Theatre of Indianapolis. She can be heard on several episodes of the Unstaged Podcast, and does numerous concerts every year with her family band, through Main Street Artists.

As an actor, Julie played the role of “Berenice” in Cabaret Poe with Q Artistry in Indianapolis for its entire 10-year run. Other favorite roles include “Gertrude” in Hamlet (Richmond Shakespeare Festival) “Narrator” in Joseph and the Amazing Technicolor Dreamcoat (Round Barn Theatre) and “Cordelia” in Falsettos (triangle! Productions). Opera roles include “Sophie” in Massenet’s Werther, Queen of the Night” in Mozart's Magic Flute, and “Titania” in Purcell’s Fairy Queen. Julie is an Equity Membership Candidate and has had the privilege of working with Broadway legends, Stephen Schwartz, and Andy Blankenbuehler.

Julie is also a produced playwright, a freelance writer for Classical Singer Magazine, and an Associate Editor of the MTEA Journal. Her recent scholarly presentations include “The Stories We Tell: Challenging Gender Bias in Entertainment” at the WKU Gender and Communication Conference; “Find Your Voice: The Safe and Affirming Voice Studio” at the Transgender Voice Training Conference in Richmond, IN; and a lightning talk, “Practice Failure for Success”, at the College Music Society Summit in Columbia, South Carolina.

Her degrees include a Doctor of Arts in Music from Ball State University, a Master of Music in Opera and Music Theatre from Southern Illinois University at Carbondale, and a Bachelor of Music in Music Education from the University of British Columbia in Vancouver, Canada. She also earned a Grade VIII Piano Certificate through the Western Conservatory of Music, and an Elementary Executant Certificate in Ballet from the Royal Academy of Dancing. She is a member of the National Association of Teachers of Singing (NATS), Musical Theatre Educators Alliance (MTEA), The Dramatists Guild, and the American Society of Composers and Publishers (ASCAP). She is also certified in Somatic VoiceworkTM: The LoVetri Method.