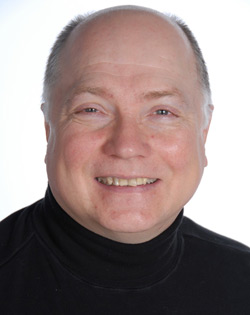 Jeffrey Beard is a part-time instructor who is teaching at Western for the second time:  the first being 1988 to 1997; and then again since 2007.  As a student at WKU, Jeffrey’s original play Eve of Winter Dreams received a full-scale production and was WKU’s entry in the American College Theater Festival in 1974.  He graduated from WKU with a Bachelors Degree in Theatre in December of 1975.  In the Fall of ’76, he began his Masters at The University of Iowa where he served as the Director of The Iowa Playwrights Ensemble for which he directed plays written by members of the Iowa Playwrights Workshop, and conducted a staged reading of a new play each week.

While there, he directed “The Lesson” and “The Indian Wants the Bronx” at the Directors Workshop, and an early version of Lee Blessing’s The Authentic Life of Billy the Kid which went on to win the American College Theatre Festival under faculty direction.  He also directed the world premiere of Don Nigro’s Doctor Faustus and a touring version of Mozart’s Cosi fan tuti.  Plus, he stage managed several productions, including performing as the production manager for the Iowa Summer Theater Festival.

While at Iowa, Jeffrey began working with The Old Creamery Theatre Company as an actor and stage manager.  Following graduation, he continued working at The Creamery where he managed to direct an original play by Don Nigro written especially for the Iowa School for the Blind, along with a workshop production of Nigro’s Landscape with Shark and Dancer.

In 1981, Jeffrey left The Creamery and had his original one-act play, “The Call of Duty,” performed off-Broadway as part of the Emerging Playwrights Program at Lincoln Center in New York City.  Since then, he has acted, stage managed, and directed a number of plays, as well as appearing in commercials and made-for-TV movies.

In 1994, Beard performed in repertory at the Kentucky Repertory Theater Company, then known as Horse Cave Theater, during that Summer and Fall as Hornbeck in Inherit the Wind and as The First Player and The Player King in Hamlet, in which he also appeared as the English Ambassador.  He has performed in a number of productions for Fountain Square Players and Public Theater of Kentucky.

The list of productions he has directed include Gypsy, Death of a Salesman, and Our Town.