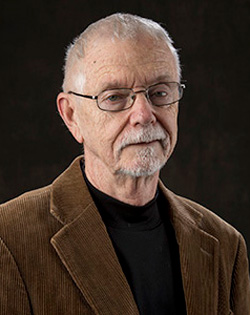 James Brown has been teaching theatre at WKU for the past 53 years. He was hired at Western in 1966 as Scenic Designer, Technical Director, Lighting Designer, and Technical Coordinator of Van Meter Auditorium, after completing his Master’s degree from Southern Illinois University.  At that time, Theatre was a division of the English Department.  He worked with Russell H. Miller, the founder of the Theatre Program at Western, until Dr. Miller’s death in 1968.  Theatre was separated from the English Department and became the Department of Speech and Theatre in 1968, then Communication and Theatre in 1973, and Department of Theatre and Dance in 1988. As the University added faculty and staff Brown’s area of teaching concentration became Lighting and Sound, a position which he held until 2006.

James Brown then took partial retirement and taught Theatre Appreciation and became Faculty Advisor for students working with props on the departmental productions. He was Scenic, Lighting and Sound Designer for the Hilltopper Dinner Theatre during the 1980’s and 90’s. He remains a longstanding member of the United States Institute of Theatre Technology, The Southeastern Theatre Conference, and the Kentucky Theatre Association. Brown goes to New York  three or four times a year to assess current theatre trends, and has attended the New York International Fringe Festival every year for the past 20 tears. His other teaching passion is swimming, and he helps with the University Swim classes, and will teach anyone willing to learn.