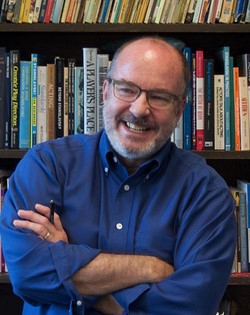 Dr. Young has been teaching at WKU since 1998. He holds a BFA in Theatre from Emporia State University, a Post-Graduate Diploma in Acting from Mountview Academy of Theatre Arts in London, England and a Ph.D. in Theatre from Wayne State University in Detroit.  Before teaching, David worked for ten years as a professional actor and director in Chicago and the Midwest.  He has numerous professional credits and has been a member of Actors' Equity Association since 1983.  He continues to work professionally on occasion.  Locally he has acted and/or directed at Kentucky Repertory Theatre and the Public Theatre of Kentucky.  At Western his productions have included Chicago, Sweeney Todd, As Bees in Honey Drown, Blood Brothers, Sweet Charity, The Real Inspector Hound and most recently Beauty and the Beast.  David is also very active as a drama instructor with area youth programs, collaborating with such organizations as Girls Inc, LifeSkills, the Kentucky Department of Juvenile Justice, the Capitol Arts, VSA Arts, and The WKU Center for Gifted Studies.  He was recently re-elected to the Commission on Accreditation of the National Association of Schools of Theatre.  He is married and has two children.  And, if you're a student in the Theatre & Dance department, you know he always has free food in his office, usually gummies and Tootise Rolls.