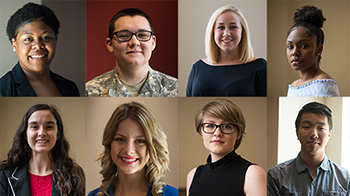 Eight WKU students were recognized by the Benjamin A. Gilman International Scholarship Program. Six students will receive scholarships of up to $5,000 for summer study abroad programs while two others were named alternates.

Bailey, a fourth-year social work major, is the daughter of Victoria E. Guy and Melvin C. Bailey.  She will study in Tanzania this summer with the Kentucky Institute for International Studies and associate professor Dr. William Mkanta in the WKU Department of Public Health.  While abroad, Bailey will participate in service-learning opportunities.

Barnes, a second-year Mechanical Engineering major, is the son of Rebecca Wofford.  He is a student in the Mahurin Honors College and the Chinese Flagship Program.  He will study abroad in China and participate in Princeton in Beijing (PiB).  Hosted by Princeton University, PiB is an intensive program in intermediate and advanced Chinese language study.

Hart, a third-year International Affairs, Spanish and Asian Religions and Cultures major, is the daughter of Sally and Fred Hart.  She is a student in the Mahurin Honors College and the Chinese Flagship Program.  She will study Arabic in Morocco this summer.  She is pursuing proficiency in Arabic and Chinese for her future career as a Foreign Service Officer with the U.S. Agency for International Development.

Haywood, a second-year broadcasting major, is the daughter of Lisa Haywood.  She will study abroad this summer in Tanzania with the Kentucky Institute for International Studies.

Wallace, a second-year political science and paralegal studies major, is the daughter of Monica Brown and Craig Wallace. She will study Middle East politics and government this summer in Morocco.  Her program is led by associate professor Dr. Soleiman Kiasatpour in the WKU Department of Political Science.

Williams, a third-year social work major, is the daughter of Jennifer and Chris Williams.  She will study abroad this summer in Tanzania with the Kentucky Institute for International Studies.

Morgan Ramey of Eddyville and Reuben Tang of Glasgow were selected as alternates.

Ramey, a third-year anthropology and east Asian religions and cultures major, will study abroad this summer in South Korea. Her family includes her father Eric Ramey and her grandparents Shirrell and Charles Ramey.

Tang, a first-year Architectural Science major, is the son of Yue Rong Li and Zhen Tang.  He is a student in the Mahurin Honors College and Chinese Flagship Program.  He will study abroad in China and participate in Princeton in Beijing.

“All of the WKU students recognized by the Gilman program will study abroad in nontraditional destinations,” Cory Dodds, Coordinator of Nationally Competitive Opportunities for the Office of Scholar Development, said. “The Gilman Scholarship and their study abroad experiences will prepare them for future national scholarship opportunities, academic study, and global careers.”