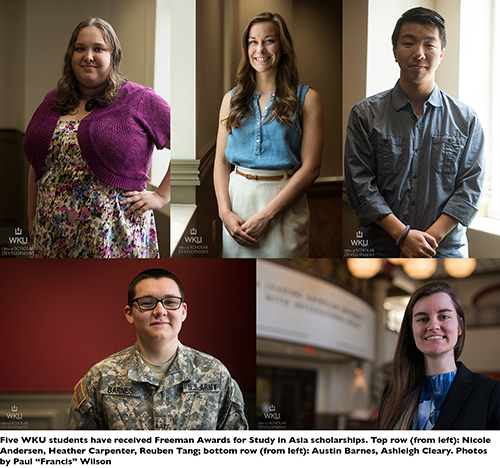 Five WKU students will study abroad this summer through support from the Freeman Awards for Study in Asia scholarship program. Nicole Andersen of Hiawatha, Iowa, Austin Barnes of Hodgenville, Heather Carpenter of Lancaster, Ashleigh Cleary of Hebron, and Reuben Tang of Glasgow were awarded scholarships of up to $3,000 to study abroad.

All five are students in the Mahurin Honors College and the Chinese Flagship Program at WKU.  Each student will participate in an intensive language program in China or Taiwan to further develop their Chinese language skills.

Andersen, a second-year Mechanical Engineering major, is the daughter of Ranae and Troy Andersen. She will study abroad in Taiwan and participate in the Intensive Chinese Language Program (ICLP). Hosted by National Taiwan University (NTU), ICLP provides an immersive environment with intensive language training and classes.

Barnes, a second-year Mechanical Engineering major, is the son of Rebecca Wofford. He will study abroad in China and participate in Princeton in Beijing (PiB). Hosted by Princeton University, PiB is an intensive program in intermediate and advanced Chinese language study.

Carpenter, a third-year Spanish and Public Relations major, is the daughter of Robyn and Scott Carpenter. She will study abroad in Taiwan and participate in ICLP at National Taiwan University. Carpenter is a founding member of the Delta Zeta, Pi Chi chapter and serves as a public relations chair on the National Panhellenic Council.

Cleary, a second-year International Affairs and Spanish major, is the daughter of Mary and Tom Cleary. She will study abroad in China and will participate in Princeton in Beijing. While abroad, she will also conduct research for her Honors thesis project that examines the effect of media on public perceptions of same-sex marriage and LGBTQ rights in China and Taiwan. Cleary is mentored by Dr. Timothy Rich in the Department of Political Science.

Tang, a first-year Architectural Science major, is the son of Yue Rong Li and Zhen Tang. He will study abroad in China and participate in Princeton in Beijing. Tang is involved with Project Pengyou and the Chinese Music Club at WKU. He hopes to work as an architect with American and Chinese clients.

“Summer study abroad programs are critical to foreign language acquisition, and our team has been striving to help our students identify effective summer programs so our students can make necessary improvement in their Chinese proficiency,” Dr. Ching-Hsuan Wu, Academic Director of the Chinese Flagship Program, said. “I would like to express my gratitude to Office of Scholar Development, whose staff has been wonderful and successful in helping our students find the means to support their Chinese studies. Thanks to the Freeman-ASIA scholarship, our students will be able to continue to develop the language skills they have acquired on campus in immersive environments abroad and move one step closer to their goal: the Superior level.”

Cory Dodds, Coordinator of Nationally Competitive Opportunities, said: “Our students’ recognition in the Freeman-ASIA scholarship competition is a credit to their hard work, involvement on campus and faculty mentors. After spending this summer abroad, our students will return to the United States better equipped for global careers.”

Freeman-ASIA is designed to support U.S.-based undergraduates with demonstrated financial need who are planning to study overseas in east or southeast Asia. The program’s goal is to increase the number of U.S. citizens and permanent residents with first-hand exposure to and understanding of Asia and its peoples and cultures. Award recipients are required to share their experiences with their home campuses or communities to encourage study abroad by others and fulfill the program's goal of increasing understanding of Asia in the United States.

All recipients worked with the Office of Scholar Development at WKU in preparing their Freeman-ASIA applications.

About the Mahurin Honors College at WKU: WKU is home to the only Honors College in the Commonwealth of Kentucky. Created in 2007, the Honors College at WKU provides an intimate, highly selective learning environment where college-age gifted and high-achieving students can develop the skills to prepare them for success in the nation’s top academic and career opportunities. Contact: (270) 745-2081.

Students: A New Academic Year on the Hill

A New Academic Year on the Hill