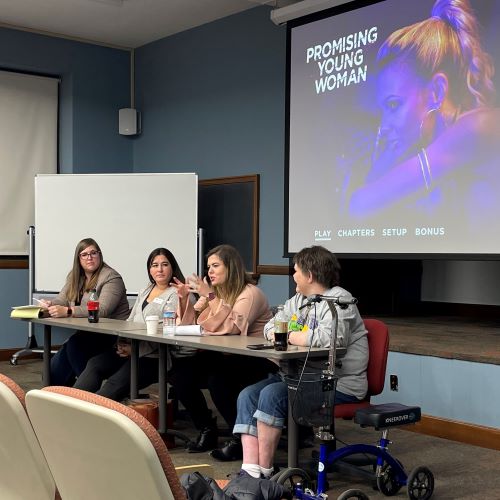 On Wednesday, November 16, the Gender & Women’s Studies program hosted a screening of Promising Young Woman (2020) proceeded by a panel discussion on sexual assault awareness, prevention, and advocacy. The event was made possible by generous contributions from the Gail B. Martin Lecture and Faculty Development Series. The event organizers, Dr. Dawn Winters and Professor Jess Folk, partnered with Alpha Xi Delta in order to invite Greek Life students into the conversation of sexual assaults on campus. Over 25 students attended the 80-minute discussion and film screening.

During the panel discussion, Dr. Winters spoke on behalf of WKU’s Department of Sociology & Criminology. She outlined the history of consent laws and statistics on who is sexually assaulted and who perpetrates. “Students were surprised by how old consent laws are—going back to the 12th century—but also by how limited they were,” Dr. Winters shared.

Mel Gerard spoke on behalf of Hope Harbor, a non-profit sexual trauma recovery center in Bowling Green. They shared the center’s resources and discussed how to be an advocate. Prof. Folk noted how many WKU students are unaware of Hope Harbor and the help they offer. For example, the center has a 24/7 crisis line that people can call or text and receive a near-immediate answer.

From WKU’s counseling center, Elizabeth Madariaga described how to create safe spaces that outmatch “red dots” on campus. She characterized how to be an “upstander” for survivors instead of a bystander to sexual harassment and violence.

The final member of the panel was Ena Demir on behalf of WKU’s Title IX office. She explained the history of Title IX, its role, and its limitations. Her insight was useful for clearing misunderstandings about the office. For instance, its jurisdiction is limited to incidents that occur on WKU campus, and its proceedings solely relate to student conduct rather than the criminal justice system.

“I didn’t know enough about what Title IX did,” Dr. Winters shared. Due to most people not understanding what Title IX is and is not, people make a lot of assumptions about procedures and point fingers at people who may not be responsible for decisions. “Hope Harbor and the Counseling Center are advocates for survivors whereas Title IX is a neutral party that must follow due process,” Dr. Winters described.

After the panel discussion, Prof. Folk and Dr. Winters screened Promising Young Woman (2020). The film follows a woman’s efforts to enact revenge against people who she feels responsible for her friend’s rape and suicide. As part of her process, she goes to bars and pretends to be blackout drunk to see if men will try to abuse her. Importantly, the film shows no assaults on screen and delivers the difficult topic with a surprising amount of humor.

Prof. Folk described the film as “smart and well-made.” She noted how many of the male roles are played by actors who usually play “good-guy” roles, which leads the audience to not expect them to perpetrate violence. This sets the viewer in the woman’s mindset. Dr. Winters added, “The opening of the movie shows how the woman is seen and treated as an object by strangers.”

Prof. Folk and Dr. Winters hope that the perspective from the film and the information from the panel play into a broader, ongoing conversation about rape culture on campus. “There were a lot of athletes there, and athletes are influential on campus. We hope they take back what they learned to their friends and teammates,” Dr. Winters stated. They are planning to host more events on this topic and will partner with a fraternity in the spring to promote accountability and responsibility.