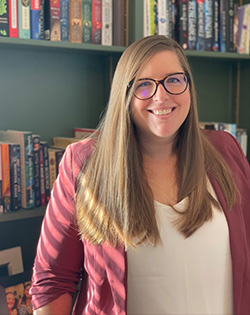 English 300: Writing in the Disciplines

Dawn Winters originally hails from Dayton, Ohio, but all of her higher education years have been spent at WKU.  Her background is in English, Education, and Teaching English to Speakers of Other Languages.  She is currently pursuing an Ed.D in Post-Secondary Educational Leadership and plans to finish in 2015.  Her full-time job is Program Director for English as a Second Language International at WKU, which is the intensive English language program housed in Tate Page Hall.  She thoroughly enjoys working with international students who have brought the world to her doorstep.

She lives in Bowling Green with her partner, Sarah, and their two dogs (a boxer named Roxy and a pug named Mops) and three cats (Crookshanks, Yoshi, and Neville).  She is a bibliophile whose reading interests include historical and speculative fiction, biographies, and Anglophone literature.  When she has spare time, she enjoys knitting, traveling with Sarah, watching bad television, and playing Lego video games.