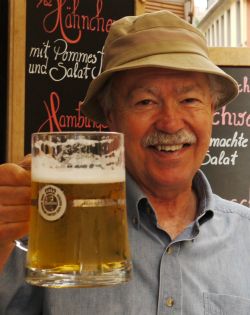 I came to Western from the University of Texas in 1969, just as the job market was doing one of its periodic implosions, and I always felt lucky to have landed a job at all, let alone one among such wonderful colleagues and students. I later became composition director for about twenty years—1984-2003—before teaching another five years under optional retirement and then five more as a part-timer until retiring for good in 2013. Along the way I specialized in Renaissance literature, my original emphasis, and then classical Greek and Latin literature, composition, and English language. I published a good number of deservedly forgotten articles in each of these areas, but also two textbooks on style and grammar, one with my lifelong friend Jim Flynn, along with five translations of Chaucer, Malory, the Gawain Poet, and an anthology of shorter Middle English pieces that I hope will outlive me. At my age, that’s a fairly modest ambition.

It’s hard to choose a highlight in a career as checkered as mine. Helping develop our English general education sequence, team-teaching in the Humanities Semester, three NEH summer seminars in Renaissance and classical literature, and five summer-in-England classes all clamor to be picked. But I’m going with 1984, the Orwell year, when I single-handedly flunked some ninety percent of the students in English 101 (roughly half the freshman class) by cooking up a department-wide pass-fail test that almost none of our then freshmen could handle. Luckily for me and them, it was only a practice test, and after hearing more than I cared to from the department head, dean, and president (who proved notably eloquent-),I was careful to water down the final version so that Man of War could have passed it. Somehow we all survived the experience. But that debacle probably helped get the requirement thrown out a few years later.

All in all, it’s been a terrific ride, and since I'm still taking classes on the hill, I'm happy to report it's not over yet.