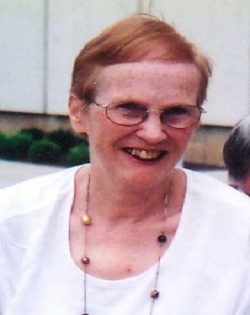 After I passed by PhD exams at the University of Iowa in 1970, I began a twenty-seven year career at WKU. My favorite class was Introduction to Literature. It was thrilling to watch students who often had little interest in literature light up as they gained new insights into their worlds because they had engaged with a certain poem or story.  During the final meeting of a summer school class, a senior football player presented such an intelligent and moving interpretation of Richard Wright's "Between the World and Me" that the whole class stood and broke into spontaneous applause.  For them, literature had stopped being a required general education class and had become a lived experience. Such moments became more frequent when I began to teach Women's Studies classes. Carol Crowe initiated the idea of creating a Women's Studies Program and hosting Women's Studies Conferences at WKU.  Following her lead, in 1990, I spearheaded Women's Studies' acceptance as an academic program and continued as Director until 1994. Those were rewarding but difficult years.

One of my proudest achievements at WKU came about after Walker Rutledge, John Spurlock, Russell Moore, and Wanda Gatlin invited me to join them in a protest movement. We called ourselves SAPS (Save Assistant Professors' Salaries.) At the time individual salaries were a private matter, but because of the Freedom of Information Act, we were able to procure from the state a print-out of the monthly pay checks for faculty and staff. We then calculated the annual salary of each faculty member along with her academic degree and years of teaching experience and published the results. In many cases there was no acceptable explanation for wide salary differences for individuals in the same department with similar degrees and years of employment.  This action caused a seismic shift at WKU, and today salaries are kept on file in the University Library. Another high point occurred as more adult women began to appear in my classes, and it became clear that they had profound needs that were not being met. So in 1988 a few of us gathered around my kitchen table and decided to start our own support group. We called ourselves WIT, Women in Transition, and then mailed surveys to over 5,000 adult women students asking them to indicate their unmet needs.  With this information in hand, we set up appropriate support services and got permission to use a meeting room in Garrett Conference Center. The WIT women became my heroes and friends. After I retired, Karen Westbrooks and I co-edited a collection and analysis of life histories of eleven WIT women. They taught me what it meant to struggle and prevail.  WIT is still alive and well on the South Campus.

My interest in research began in graduate school. I was still a Catholic nun and preparing for my final PhD exams, when my major professor said, "Why don't you leave that community you're in and join the community of scholars." That was it for me. Along with Bob I was hired as a research assistant by the University of Iowa's English department. We soon married and never looked back. We are most proud of  our work as editors of THE LETTERS OF CHARLES O'CONOR OF BELANAGARE (1710-1791.)  O'Conor was one of 18th-century Ireland's greatest scholars.  He corresponded with the important intellectual and cultural figures of his day and collected, preserved and had translated the ancient Irish manuscripts that were in danger of being lost. I am also proud that Professor Henry Louis Gates asked to include my essay "LINDEN HILLS: A Modern INFERNO" in GLORIA NAYLOR: CRITICAL PERSPECTIVES PAST AND PRESENT, which is part of the Amistad Literary Series.

I loved my years at WKU and cherish the friendships I have made here.  More recently my days are spent caring for Bob, who has limited mobility and dementia following a series of strokes.  Luckily I have the help of an excellent home health aide, Donna Uhden.  Donna and Bob go out to lunch five days a week and are happy to have discovered a watering hole frequented by ex-English majors where Bob enjoys recalling old times at WKU.