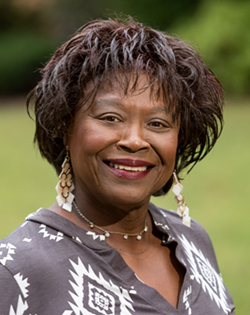 Dr. Ardrey specializes in voting and electoral behavior, conducts research on the political participation of women and minorities and has made contributions to the extant literature through publications on the political beliefs and behavior of African Americans. Her areas of expertise focus on the impact of race on politics and the role gender plays in vote choice and participation. Other interests include African American Studies, media and politics, campaign management and public opinion.

A graduate of Winston-Salem State University and The Ohio State University, she is recognized as a media analyst for both local and state media outlets. In addition to University teaching and service, Dr. Ardrey is active in state and local politics as a political consultant and community activist. She has been a campaign manager, a member of the Democratic party executive committee, president of the Bowling Green/Warren County NOW, and currently serves as the political action committee chair for the Bowling Green/Warren County National Association for the Advancement of Colored People (NAACP).

Ardrey is the former chair of the Political Science Department and Director of the African American Studies Program.

As coordinator of the WKU Political Engagement Program, Dr. Ardrey believes that one of the goals of education is to equip students with the knowledge, sensitivity and skills they need to be productive citizens in a diverse society. To ensure students gain those skills, Ardrey works to establish experiential learning experiences and study abroad opportunities. She established The Washington Center for Internships and Academic Seminars (TWC) at Western Kentucky University and serves on TWC national Advisory Board. She served as a faculty teaching fellow for several Republican and Democratic Nominating Conventions from 1988 – 2012.

Saundra Ardrey is well known around the WKU campus for the “study away” and study abroad opportunities she creates for students. Her trips are varied yet have a common theme. Whether students trace the Underground Railroad from Montgomery to Canada, explore the roots of modern jazz from the deep South to Carnegie Hall or develop a service learning project with villagers in Elmina, Ghana – the purpose is always the same – to create an appreciation for and sensitivity to non-European cultures.

Ardrey organized and coordinated the first ever Africana/African American Studies Conference in Turkey at Bilkent University. This 2008 conference featured students, scholars, performers, and artists from around the world engaged in a discussion of the achievements of and challenges still facing descendants of the African diaspora.

One of her greatest professional achievements is being awarded the prestigious Fulbright Fellowship to teach at the University of Limpopo in South Africa for the 2017/2018 academic year.

Dr. Ardrey is a much sought after speaker and commentator and has received numerous awards and honors, including the 2018 Outstanding Woman of the Year for Bowling Green/Warren County and one of the Outstanding People of the 20th Century.

Her husband of forty-three years, Dr. William Ardrey, is a trauma specialist with Inspire Medical Group. They have two children, Chris and Lindsey. Chris is a practicing social worker in Princeton, KY. Lindsey, an ordained Episcopal deacon is in her final year of graduate work at the Seminary of the Southwest. Upon graduation, she will be ordained as an Episcopal priest.