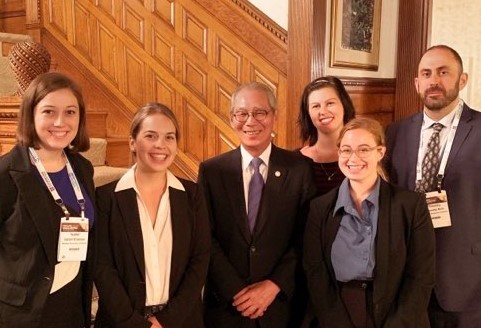 Over Labor Day weekend, International Affairs major Isabel Eliassen attended the American Political Science Association’s annual meeting in Washington DC. The APSA annual meeting is the largest political science conference in the United States. Eliassen joined thousands of political scientists from around the world in presenting her research. The paper she presented at the conference was co-authored with Professor Timothy Rich and explored perceptions of same-sex marriage and homosexuality in Taiwan. “Not only is this topic exciting and timely, as Taiwan legalized gay marriage earlier this year,” Eliassen said, “but as a Chinese and International Affairs major, Taiwanese politics are of particular interest to me.”

While attending the conference, Eliassen was also able to attend several panels held by the Conference Group on Taiwan Studies (CGOTS), a sub-section of the conference that on Taiwanese politics. As a part of this group, she also attended the CGOTS dinner, held at the former residence of the Taiwanese ambassador to the US, where she met the current ambassador. Through this, she was able to meet several employees of the Taiwanese Embassy and was even able to talk to them in Chinese, something Isabel found particularly useful for her professional development. “This experience was truly eye-opening,” Eliassen said, “and it allowed me to see how important the work of political scientists can be, particularly in the international arena.”

Eliassen received a FUSE grant to support her research and conference attendance. In addition to presenting at the APSA annual meeting, she has published several journal and news articles related to LGBT politics in East Asia.

Eliassen considers her experiences with FUSE and the American Political Science Association’s annual meeting to have been essential to her undergraduate education. “That I have been given the opportunity to attend conferences, present papers, and even publish articles here at WKU has been a cornerstone of my college experience”, said Eliassen. “Not only has this helped me realize my passion for research, but I have also developed my research and writing skills, discovered new interests, and will be more competitive when I apply for graduate school.”