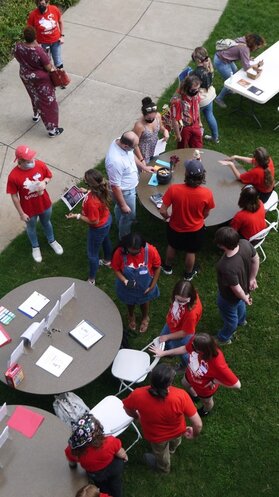 With a new interactive format, the 2021 English Convocation delivered more than just cookies, games, and a dead cicada. It created a visible impact on participating students within the English department.

This year’s Convocation occurred on Friday, Sept. 10, in HCIC 1011, and with the advantage of pleasant weather, was also able to be partially outside. However, this year’s Convocation was strikingly different than in years prior, as the normal speeches were replaced with a table structure. A change that several at the Convocation noted greatly enhanced their experience.

“In the past, the Convocation has been a more static event, with individuals coming up to speak briefly about our programs and the different experiences, resources, and opportunities available to English department majors and minors, following by a bit of mingling. This year, with having the different tables and folks moving about and the scavenger hunt, we had a lot more active engagement, both student-to-student and student-to-faculty. We’ll definitely try something like this again next year!” Dr. Alison Langdon, head of the English Department, stated.

It was obvious to those working at the Convocation that this new format provided a more enjoyable experience for students. Seth Nevin witnessed this firsthand as he worked at the Literature Major table.

“I believe that this iteration was better received, at least for me personally. The students that circulated engaged with the table and saw familiar faces behind tables compared to the speeches that had limited selections and a more rigid feeling to the presentation. With the table set-up, attendees were allowed to approach conversations that seemed interesting to them rather than attend a pseudo-lecture of speeches advocating for English in differing ways,” Nevin said.

Not only was this visible during the Convocation, but after as well. Kayla Spears, who ran the Internship table, remarked at how she had already seen the effects that the ability to offer personalized suggestions to students had made.

“I met a new English student, a freshman majoring in Creative Writing. I told her about the English Club as a way to connect with more wonderfully weird English majors in a fun environment. This past Monday, I saw her at the English Club meeting! It was great to know that our convocation has pushed some students to become more involved in the opportunities we offer,” Spears stated.

The personalization was not the only thing at the Convocation that students could enjoy, as cookies from a local business, Baked, were provided and an interesting scavenger hunt took place; one which took students on a journey to match corresponding items with their professor.

“We, including the students and staff, commonly giggled as we tried to figure out which scavenger hunt objects belonged to certain professors. At my table, there was a dead cicada and leaf in a plastic cup [we later learned it was Dr. Fife’s!]” Spears stated.

The scavenger hunt added extra encouragement for students to have conversations with various professors at the Convocation. As Nevin noted, the Convocation provided an opportunity to remove the professors from the normal classroom setting and introduce them as approachable people.

“I believe one of the highlights for the Convocation for me was seeing previous professors walking around the Convocation and chatting with previous, current, and upcoming students about courses and decisions they have made...the Convocation allowed me to casually engage with my current professors and other professors that I had not had the opportunity to take. In general, I see it as a way to remove a degree of separation from the classroom setting and get to know professors more as people rather than their subject matters,” Nevin stated.

Overall, this year’s Convocation was seen as a success, although there are a few things that are already promised to be improved for next year. The scavenger hunt provided an interesting way to get to know the department’s professors but proved to be slightly challenging. “The idea was that we could use this as an opportunity to start conversations, with students talking to professors to try and tease out what their objects were. The actual matching ended up being more challenging, though. So next year, instead of having faculty members put their names on name tags, they’ll put a clue about their object,” Dr. Langdon stated.

Nevin also noted that had the Convocation happened in its usual location, the turnout for the event would have probably been even higher than what it was. “We used a common room within the Honors College and International Center rather than the Faculty Building next to Cherry Hall due to construction. I believe that this difference alone made a difference in attendance,” Nevin said.

However, even with these small setbacks the Convocation this year delivered in its promise to inform students of all the opportunities they could participate in, but this year it meant something even more. “It’s certainly a good way to find out how to make the most of English Studies at WKU, but especially given that we have been pretty isolated from each other for the last year and a half, one of the most valuable things about the Convocation was the sense of community and connection,” Dr. Langdon said.

It's this renewed sense of community that has greatly impacted students, especially those who, like Spears, had been a student at WKU through the beginning of the pandemic.

“For the past year, it’s felt like we were all trapped behind our laptop screens. It was wonderful to get everyone together for the first time in a while, and to introduce new students to the inclusive, beautiful community we have,” Spears said.

While this year’s Convocation may be over, it’s still not too late to join any clubs or activities you may be interested in. And all students are encouraged to attend next year’s Convocation because the experience can be, in many ways, unparalleled and life changing.

As Nevin stated, “English, as a language and a subject, has always emphasized a community and its nature. Convocation is a way to bring the entire major together despite differences of courses and experience. I’ve met and reconnected with friends while at Convocation alongside finding new clubs and opportunities within that major that would have been lost if I hadn’t participated.”