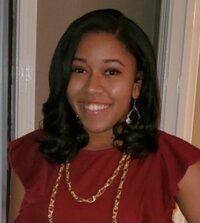 Q: Why did you decide to minor in Spanish?

A: I decided to minor in Spanish to grant myself more opportunities academically and professionally. Having the ability to network with others will allow me to stay connected and communicate with more people in the world.

Q: Why do you think Communication Sciences pairs well with Spanish?

A: Studying the Spanish language and culture has been an eye opening experience. I have gained a different perspective on every culture from being exposed to the Latino culture at an early age. This has resulted in me being an accepting and open-minded individual.

Q: Why should college students--of all majors--consider studying Spanish or another language?

Q: What advice would you have for those who are struggling to learn another language?

A: What I would say to someone that is struggling to learn another language is to never stop studying your language. Speaking in the language or even listening to music or television in the language that they are studying are all ways to learn/better a language. The process of fluently speaking a different language can be long and filled with difficulty, but once you keep studying the language, the growth will show.