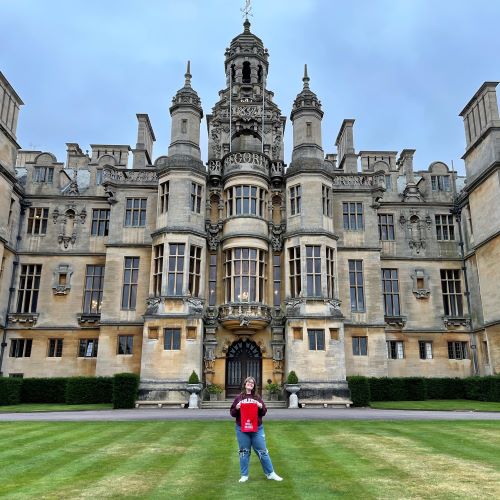 Catherine Sheffield, a Clarksville, Tennessee senior and Creative Writing major, studied in the United Kingdom this summer in the Harlaxton College 4-week program, and she earned a Benjamin A. Gilman Scholarship to fund the trip. Sheffield shared that the study abroad opportunity was one of the reasons she attended WKU. Although the trip was extremely different due to the pandemic, Sheffield has no regrets about going when she did.

The most important aspect of the trip’s success was the many precautions taken to keep students and faculty safe from COVID-19. For the first two weeks of the trip, everyone was quarantined within the Harlaxton manor, and they were tested for the virus multiple times. During that time, students attended three-hour daily lectures and explored the manor’s grounds. After quarantine ended, the schedule rotated between class days, exploratory trips, and free time.

Although the pandemic limited travel, Sheffield was still able to visit many exciting places, such as the Nottingham Castle, the Sherlock Holmes Museum, Skegness, and a Charlie and the Chocolate Factory-themed hotel. Of course, there were a few instances of plans having to change. For example, Sheffield’s class read Tennyson’s “The Lady of Shalott” and went to the Tate Museum to see Waterhouse’s painting of “The Lady of Shalott,” but the exhibit was closed. However, the change had a positive outcome.

“My professor had to improvise our writing reflection for that day,” Sheffield said. “We had to look at paintings from that period and relate it to something that we had read.” Sheffield connected a painting of a bridge that was torn down before they built the Millennium Bridge to Owen’s “Dulce et Decorum est.” The creative analysis “unexpectedly enhanced the reading experience.”

Amidst traveling and learning experiences, Sheffield noted, “What made Harlaxton ‘Harlaxton’ was just the people who were there.” Because of the pandemic, there were only around thirty students on the trip, and Sheffield was the only one from WKU. In the two weeks of quarantine, Sheffield got to know everyone. She said, “After quarantine, we went on a London weekend trip, and we were already really close friends, so it wasn’t awkward to travel together, which I imagine would be different in a regular semester.”

On some exploratory days, there were as few as four students traveling with the professor, which allowed them the opportunity to connect on a more personal level. Another person that students got to know well was the chef. People familiar with the Harlaxton program may be relieved to learn that a new chef and catering team were hired, and Sheffield reports that the food was amazing (and the chef hilarious).

Sheffield feels that the friendships she formed will be long-lasting and described the whole Harlaxton experience as life-changing. When she first aspired to participate, she was not sure if it would happen because no one in her family had gone to college or traveled abroad. “I hyped it up to be this big untouchable experience, and then I got back, and I was like ‘I could easily do that again,’” Sheffield said. “It’s worth having big ambitions because they are definitely real and doable.”

Sheffield was able to make her ambition a reality by applying for scholarships. While she won a Gilman scholarship that would have covered a significant portion of the cost, Sheffield had to deny the award because the Gilman program could not fund trips to countries with a Travel Advisory above Level 2. Upon learning of this issue, Sheffield contacted the Mahurin Honors College, and because she had earned the scholarship, WKU and the Honors College provided her the funding she needed. Since very few WKU students were traveling abroad, the resources to do this were available.

Although Sheffield could not accept the Gilman award, she offered to share her experiences as an applicant to aid other students. The application mainly consisted of two essays—one on personal experience and one proposing a project. Sheffield advised, “For the Gilman or any nationally competitive scholarship like that, you definitely need someone in the Honors College to work with you because it’s a whole secret formula for essays.”

Sheffield shared that because of her anxiety, she is prone to procrastination. “If you’re a student like that, you are well aware that you’re like that and that you can’t do anything about it, but don’t give up on the Gilman scholarship because of that,” she said. She said that the application process was intense and a lot of paperwork, but “it’s not impossible, and it’s worth it if you need the money.”

For the project proposal, Sheffield said, “Make your project something that you want to do and that you think would genuinely be beneficial to you and other people.” She emphasized that recipients are expected to uphold their relationship with the Gilman program by completing the project and keeping in communication.

Sheffield's proposal essay presented two goals. The first was to observe British dialects of the English language. Sheffield is a Teaching English to Speakers of Other Languages minor who is interested in teaching English in Europe, so she is fascinated by the many components of the language. One aspect she is particularly interested in is grammaticalization, the process of words developing new grammatical functions. Sheffield aims to use grammaticalization creatively in her Honors Capstone Experience.

The second goal of Sheffield’s proposal was to gain experience and share that experience with other students. She volunteered to speak in Honors 251 classes to detail scholarships and study abroad opportunities because she wanted to ensure that Honors students knew what was available and possible. Now that Sheffield has the experience of winning a nationally competitive scholarship and taking her dream study abroad trip, she hopes to do what she can to help other students do the same.