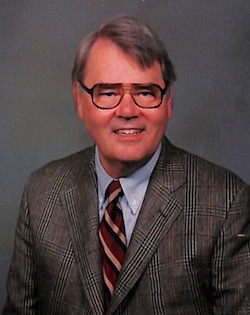 The WKU Department of History is sad to share that our friend and colleague, Dr. Richard Stone, passed away a short while ago at the age of 83.

Dr. Stone was born in Spartanburg, South Carolina on July 31, 1937. He was the son of Dr. R.G. Stone and Marye Grove Stone of Raleigh, North Carolina. His father served for many years as president of St. Mary's College, an Episcopal women's school in Raleigh.

A veteran himself, Richard's specialty was military history. He wrote two books about Kentucky military history: Kentucky: A Brittle Sword and Kentucky Fighting Men. He also contributed articles to publications of the East Tennessee Historical Society and entries for the Dictionary of North Carolina Biography and the Encyclopedia of Southern History.

Richard was predeceased by his wife, Ruth Elizabeth Clark Stone, whom he married in 1965, and by his daughter, Marye Stone Dahlman. He is survived by his sixteen-year-old grandson, Nicholas Dahlman, and his son-in-law, Carl Dahlman of Indianapolis, Indiana. Other family members include his brother-in-law and his sister-in-law, Bennett and Alice Clark of Lexington, Kentucky, and his nephews, Thomas B. Clark, Jr. of Tacoma, Washington and Edwin H. Clark of Lexington, Kentucky. He is also survived by several first cousins. Richard's family is grateful for the dedicated services of his caregivers Margot Jones and Gary Hays.

Richard was a beloved professor, and all who knew him would agree that he was a very fine and kind man with a strong love and commitment to his family and friends. Arrangements are provided by J.C. Kirby & Son Funeral Chapels of Bowling Green, with private burial services in Lexington Cemetery.