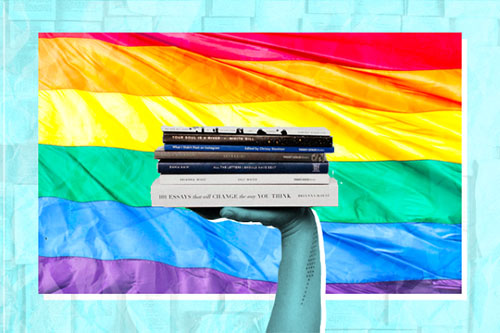 Throughout June, the WKU Department of English has celebrated Pride Month by sharing LGBTQ+-centric literature on Facebook and Instagram. For the last day of Pride Month, I am discussing my thoughts on the power that literature has for the queer community.

A writer has the ability to share their thoughts with a limitless audience in considerate and effective words. They offer an opportunity to experience what it is like to live another person’s life. When we read someone’s perspective, we begin to understand what they endure and what they cherish. This power of literature has allowed minorities to establish themselves in the majority’s consciousness.

One example of such a work of literature is Am I Blue?: Coming Out of the Silence, a collection of short stories centering on homosexuality. Published in 1994, Am I Blue? was groundbreaking in portraying to the public gay people who did not veil their identities nor die tragically in retribution. For some cishet (i.e., cisgender and heterosexual; broadly speaking, non-queer) readers, these stories were the first time they saw gay characters depicted realistically and empathetically.

Am I Blue?, as does much of queer literature, portrays homophobia in its many forms­—violent, systematic, familial. When cishet audiences read such descriptions, they can see how queer people face discrimination. Once they gain understanding, hopefully, they will be motivated to recognize discrimination in real life and work to end it.

It would be unrealistic if stories about queer people were only about discrimination, though. Am I Blue? also describes love, friendship, war, coming of age, and other aspects of life. The stories convey that gay people live through universal experiences and feel the same emotions as all people feel. Portraying queer characters in familiar narratives normalizes queer people’s existence in what was seen as a cishet society.

An important fact to understand is that the audience of Am I Blue? is not expected or intended to be all cishet people. Many of the stories were written to send a message of hope to queer readers. The characters may face difficulties, but they find acceptance, kindness, and love. The stories reassure queer readers that they are not alone in their struggles and will not endure them forever. One reason queer people want representation in literature is for such reassurance by having examples of queer people being happy, finding love, and simply living.

By demonstrating assurance and hope, queer literature uplifts the spirits and mental health of the queer community, and by fostering empathy with cishet readers, queer literature creates allies that can help work towards acceptance and equality. Whether on an individual or societal level, queer literature can make great impacts and, thus, should be shared.

I aimed to share examples this month, but I recognize that I shared merely a sliver of queer literature. When deciding what books to showcase, I primarily focused on the queer audience and providing reassurance in enjoyable stories. Pride Month is a celebration, after all, and I wanted to celebrate queer people existing in epic tales. I hope readers can connect with the characters and obtain assurance, understanding, or plain enjoyment from their stories.

I recommend researching more examples of queer literature for a greater understanding of the diverse community or for stories more tailored to your tastes. One resource I used was this list of books that have received a Lammy Award for being a notable example of literature written by or about queer people.

No matter your identity, I hope you have found something amazing to read this month that showcases the heart of Pride!