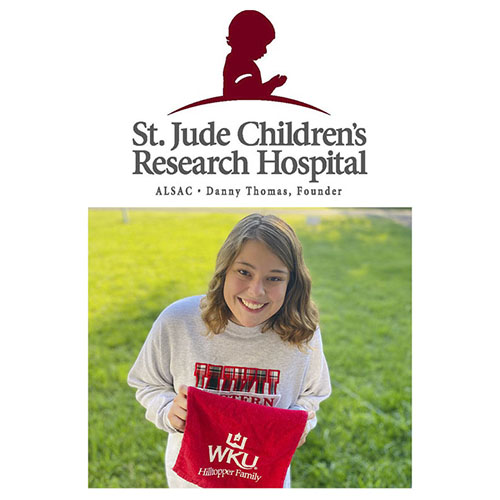 WKU’s 2020-2021 Midnight on the Hill campaign raised $80,608 for St. Jude’s Children’s Research Hospital. Professional Writing major Hanna Van Winkle served as the co-executive director for this year’s committee. Van Winkle, a senior from Slaughters, Ky., shared details about the fundraiser and her role.

Midnight on the Hill (MOTH) is a fundraising campaign led by WKU students that raises money for St. Jude’s Children’s Research Hospital annually. Beginning in August, the MOTH committee recruits students to encourage people to donate, usually through social media exposure. The committee also contacts organizations in Bowling Green to request donations. In the spring, the committee holds the finale event to celebrate the fundraising. Participants enjoy fun activities while continuing to fundraise until midnight when the total amount of money raised is announced. Most years, the event begins at 6:00 pm and provides food, but due to the pandemic, this year’s event changed.

The 2020-2021 MOTH finale event was on March 26. Since there could not be food, the event began at 9:00 pm. Attendees remained masked and socially distanced, but they were still able to enjoy the activities. MOTH was one of the few fundraisers able to host an in-person event this year, and they raised $10,000 on that night alone. Van Winkle thought MOTH was quite successful in the circumstances. “Raising $80,000 for the kids during a pandemic was awesome! We were really happy that people were still willing to give and help support us,” she said.

Van Winkle shared that her philosophy is to help others and that St. Jude’s is a cause she will support her whole life. “Fundraising for St. Jude’s is a worthy cause because you know that you’re providing a family the opportunity to see their child get better and never have to worry about money,” she said.

Because of her passion for the cause, Van Winkle served on the MOTH committee for two years and then applied to become the executive director. She and Noah Powers were selected to serve the position together for their combined experiences. “I have event planning and fundraising experience, and Noah has recruitment and public relations experience,” Van Winkle explained. As co-executive director, Van Winkle helped select the executive board, facilitate MOTH meetings, plan the finale event, and contact organizations for sponsors.

Van Winkle named the most involved process in fundraising as contacting people. For example, she reached out to around 100 organizations for donations. Van Winkle said, “There were days I sat for three hours with a list of phone numbers of restaurants and companies in Bowling Green. I called and asked if they would sponsor us. There were a lot of noes, but there were a lot of yeses. It takes the courage and time to call people and ask them for support.”

Van Winkle described that her English major skills assisted her in the communication aspect of the fundraiser. “I was able to create messages to send to organizations, and I sent hundreds of emails to participants with fundraising tips and reminders,” she said. Frequently communicating with students and organizations, Van Winkle had to consider how to deliver her message formally and informally in a friendly and informative tone. “My English major helped me out for sure,” she said.

While Van Winkle served as a leader in the MOTH committee, she stressed the importance of other people’s work in the fundraiser. She said, “I couldn’t have done any of this by myself—without the other 18 amazing executive board members who worked so hard in fundraising and planning the event. We especially could not do it without all of the students who participated. We had over 500 fundraising, and over 350 came to the event. The student body and our community in Bowling Green made it happen.”

Van Winkle encourages other people to get involved and support St. Jude’s. MOTH is currently accepting applications for the 2021-2022 executive board until Friday, April 23. Apply here.