Why English? Senior Keylee Garrison Shares Why English is Beneficial in Every Career Field 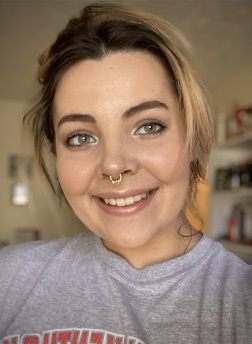 Keylee Garrison is a senior English major with a minor in Spanish from Bowling Green, Kentucky.

Why did you choose WKU?

Like many Bowling Green natives, WKU seemed like a natural choice when searching for colleges. I looked into other colleges, but I came back around to WKU due to their Spanish program and scholarship opportunities.

How has studying English helped your study of another language?

Before I was interested in studying English in college, I was focused more on my Spanish studies. As a native speaker, my understanding of English grammar was subconsciously understood. Of course, we studied grammar in school as well, but I still didn’t quite understand the specifics. Having to learn a new language complete with new vocabulary and grammar forced me to be less passive towards these components of language. When I was in the linguistics class, 204 I believe, we had to break down each part of a sentence to demonstrate we understood the parts of a sentence and how they worked together. Spanish relies heavily on the tenses, so this means that the way we view sentence structuring is different; because of this, I was better equipped to dissect English sentences like I had dissected Spanish ones when first learning the language which improved my understanding of both languages simultaneously.

How has English influenced your decision to study law?

I have always had an interest in law, even since I was a child. English influenced me to pursue law because the main skill anyone working in this field should have is the ability to communicate well. Have you ever been in an argument with someone who seems to sidestep all of your points, and you’re left feeling defeated even though you know your argument was just? English instills rhetorical tools in students so that they can stand their ground in such an argument. I did not realize how many people struggle to communicate effectively in general prior to becoming an English major.

What has been your greatest learning experience in the WKU English Department?

I honestly feel like the entirety of my experience in the English program has been a learning experience. I used to write carelessly only when I had to. Now, I view writing much like construction. Every piece of foundation you lay for your writing is going to determine how well it can withstand a counter argument or critique. You hold the power to manipulate language to your advantage, and that can be an overwhelming sensation. But, there is no better feeling than the joy you experience after writing something you’re proud of, that addresses something you’re passionate about.

What is the best way to make the most out of the WKU English program?

I think the best way to make the most out of the English program is to get fully immersed in the department. I encourage students to go to department events, join their clubs, or even apply for internships or jobs so that they can meet other students with the same goals and interests. I think the worst part of being a single student mom is the isolation and lack of time to do extracurricular things. I often feel out of place in my classes not because the students or professors are unwelcoming, but simply because I am not immersed in campus life like the average student might be. It is so easy to lose motivation or become depressed while going to college, so establishing a strong friend group who can provide support is absolutely crucial to maximize the college experience.

What are your plans after graduation?

I do not plan to go to law school immediately after graduation like I had previously thought I would. Instead, I want to find a career in social media or web-based content writing for businesses.

What advice would you offer to someone who is deciding on declaring an English major?

I highly recommend majoring in English to anyone who enjoys language, writing, and communicating. English Majors are well aware of the “but what will you do with English?!” question posed by concerned parents who don’t have enough basement space as it is. However, the answer to this question is simple: whatever you want. I credit career counselor Anna Meany for relaying to me the vast opportunities that studying English creates. Like I mentioned previously, the most important skill English provides you is the ability to communicate, which you can then utilize in basically any career. The program is intense at times, but the English faculty are some of the most caring, understanding professors I’ve ever met. I encourage students to make connections with the faculty because this, too, will enrich your overall experience and provide you with potential references! In any degree, you’re eventually going to hit a wall where you think “I don’t know if I can or want to do this anymore.” It’s tough, but have confidence in yourself that you can persevere through it.