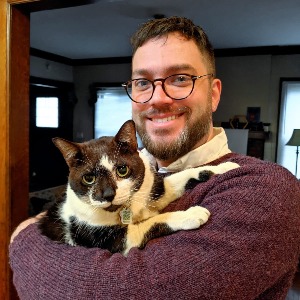 When I enrolled at WKU, I had recently returned from living in the Dominican Republic and had spoken Spanish most of my life. Since French is an important language in the Americas, I wanted to add it to my linguistic repertoire. In the summer after my freshman year, I followed my interest in French and took a short trip to Montreal and fell in love with the city. The following year I did a study abroad and learned about the translation and interpreting industries and decided to major in French and minor in Spanish to refine my language skills. I later immigrated to Canada where I lived and worked in bilingual and Francophone contexts for 13 years.

WKU’s language programs were small and I benefitted from strong relationships with my professors. Consequently, in the French major the professors often tailored the course offerings to balance their own interests and those of the small cohort of students. I’m confident that my own interest in Canada and in translation is what led to Drs. Egloff and Love to teach courses on those topics during my BA program.

During my undergrad I worked full time and wasn’t able to enjoy all of the academic life on campus as I might have liked. Nevertheless, there were two activities that I tried never to miss, our French coffee hour and the movie nights. French coffee hour was an informal activity that I organized with several other French majors, minors, and Francophone students in other programs as an extension of the formally-organized French club events. Once a week, after class, we would gather to talk about whatever we wanted, but it had to be in French. We were a small group, but it allowed us to improve our fluency by discussing topics outside the scope of classroom themes, like dating, politics, music, etc. Similarly, the movie nights organized by the department gave me an insight into what was happening in the cultural scenes of the Spanish and French-speaking worlds. In a time before Netflix, it was a crucial window into the cultures I was studying.

I had a unique opportunity to intern with a Bloc Québécois member of the Canadian parliament during the summer in which marriage equality became federal law in Canada. My internship, which was completely in French, allowed me to research policy related to official bilingualism in Canada, and linguistic demographics in Quebec. Furthermore, I gained insight into an aspect of Québécois identity that is often misunderstood from the outside, the desire for independence from the rest of Canada. This concrete French-language work experience expanded on my language and literature courses at WKU and gave me Canadian work experience, which helped me to get a job teaching advanced English to government employees upon moving to Canada two years later.

I first began teaching Spanish as a tutor in high school. During my years at WKU I continued tutoring and also taught classes for Bowling Green-Warren County Community Education. Upon moving to Canada I started teaching English as a second language. I decided to go to graduate school because I enjoyed teaching languages and thought that I would enjoy teaching in a more specialized and advanced context. With a specific interest in translation and bilingual/multilingual communities, pursuing a PhD in Spanish and Translation Studies at the bilingual (French/English) University of Ottawa was a logical fit. During my graduate school years, I added my three primary languages together and taught Spanish as a second language to native speakers of both English and French.

If we consider the soft skills first, learning another language and culture teaches you to see things differently. As John Ralston Saul said, if you walk through the world with two languages twice as many doors are open to you, twice as many windows are available to look through. By building relationships with people who have a different worldview you can learn to appreciate things from more than one angle. The ability to reflect and see things from a different point of view has never been more important than it is now. The US has become ever more polarized and I believe that much of this polarization is due to the inability of people to see things through others’ eyes. Similarly, the ability to think critically about the information that is presented to us can help us assess reality and separate it from false rhetoric.

From a practical angle, globalization is here. In a post-COVID-19 world, employers know that working remotely is the new normal. Since employers can look literally anywhere in the world to hire for positions, speaking more than one language is essential. Many students around the world learn English very well; if Americans don’t prioritize acquiring fluency in other languages, we will be at a disadvantage when it comes to employability.

My students who struggle most are those who want to focus on rules and “get it right.” That’s important, but learning a language is like riding a bike. You can’t just read a book about riding a bike and then expect to do it flawlessly. You have to get on and pedal. Sometimes you’ll fall, but if you don’t get on, you’ll never get comfortable.