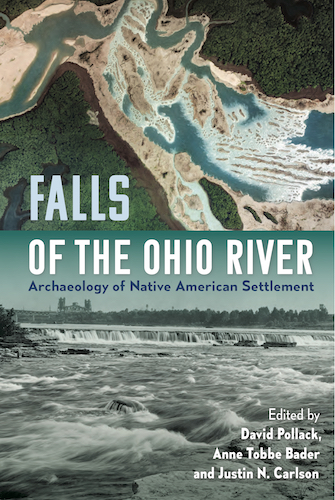 Two members of WKU’s Kentucky Archaeological Survey are co-editors of a new book on Ohio Valley archaeology. Dr. David Pollack, KAS Director, and Dr. Justin N. Carlson, KAS Project Director, along with co-editor Dr. Anne Tobbe Bader, owner of Corn Island Archaeology in Louisville, have assembled an exciting set of papers presenting the latest research on Native American settlement in the Falls of the Ohio area in Kentucky and Indiana.

Falls of the Ohio River: Archaeology of Native American Settlement presents current archaeological research on human adaptations to an important landscape feature: a series of low, cascading rapids along the Ohio River on the border of Kentucky and Indiana. Using the perspective of historical ecology and synthesizing data from recent excavations, contributors to this volume demonstrate how humans and the environment mutually affected each other in the area for the past 12,000 years.

These essays show how the Falls region was an attractive place to live due to its diverse ecological zones and its abundance of high-quality chert. Through studies spanning thousands of years, contributors portray the rapids as at times a boundary between Native American groups living upstream and downstream and at other times a hub where cultures converged and blended into a distinct local identity. By employing the notion of historicity, supplemented with ideas concerning social boundaries and identity, the volume’s contributors contextualize the Falls of the Ohio River within local and regional trends as expressed through stone tool styles, mortuary traditions, settlement patterns, plant consumption, and ceramic production.

Together, the chapters in this volume demonstrate that the Falls of the Ohio was a focal point on the human landscape throughout the Holocene epoch. Providing a foundation for future work in this location, the authors show how the region’s geography and ecology shaped the ways humans organized themselves within it and how, in turn, these groups impacted the area through their changing social, economic, and political circumstances.

Scheduled for release in May 2021, Falls of the Ohio River: Archaeology of Native American Settlement is published by the University Press of Florida as part of its Florida Museum of Natural History Ripley P. Bullen Series. Founded in 1945, the University of Florida Press publishes titles in anthropology and archaeology, the arts, history, literature, science and technology, and other subjects. The press publishes 100 books each year and has a current backlist of about 2,000 titles, of which over 250 are anthropology/archaeology books. The press is very highly regarded among Eastern Woodlands archaeologists.

Founded in 1995, the mission of the award-winning Kentucky Archaeological Survey is to provide a service to state and federal agencies, work with non-profits and private landowners to protect archaeological sites, and educate the public about Kentucky's rich archaeological heritage. The Survey provides hands-on educational experiences to WKU students in the field, the lab, and the community. KAS has been housed in the Department of Folk Studies and Anthropology at WKU since 2019.