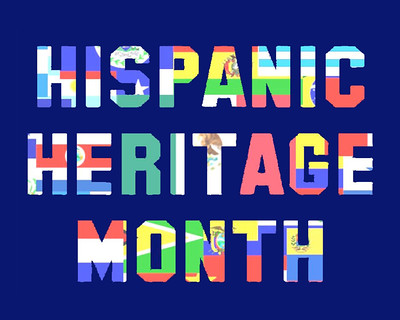 When National Hispanic Heritage Month began on September 15th, the WKU Department of English announced we would showcase five influential Hispanic authors on the department’s Facebook and Instagram pages. Today, the final day of Hispanic Heritage Month, we shared the last post. To wrap up our celebration of the month, we are sharing more information about its significance.

National Hispanic Heritage Month is dedicated to celebrating Hispanic peoples’ contributions to US history, achievements, and culture. The celebration began as a week designated by President Lyndon Johnson in 1968. In 1988, President Ronald Reagan expanded the observance into a month. September 15th was chosen as the month’s start as this date marks the Act of Independence for Central America. On this day in 1821, Costa Rica, El Salvador, Guatemala, Honduras, and Nicaragua joined forces and gained their collective and individual independence from Spain. The independence days of Mexico, Chile, and Belize also fall within the month.

The US military recognizes the great service from Hispanic citizens, and recently, Hispanic people have become prominent political leaders and activists. The influence of Hispanic cultures on US culture is indisputable. The entertainment industry involves many Hispanic musicians, athletes, and actors. The Spanish language, Hispanic foods, and traditions such as Cinco de Mayo are commonplace for most of the country.

Hispanic contributions to US literature are notable because literature is often a representation of culture. The dominant voice of US literature has been that of white males of European descent. This is not indicative of the diverse culture of the country. By establishing their voices in US literature, Hispanic authors are asserting their place in the country’s culture. Many writers also incorporate their multilingual identity within their writing, which demonstrates the linguistic diversity of the country.

A great number of Hispanic authors are activists. Their writings discuss multiple issues including assimilation, classism, racism, and environmental destruction. Such dynamic works have opened the eyes of many Americans to issues within our society. Thus, Hispanic literature is an important field to study for the sake of progress. People will enjoy studying this topic as there are many inspiring and entertaining works to choose from. We have showcased a fraction of this literature on social media, but we encourage our students to find more to read. Some authors to start with are Gloria Anzaldúa, Francisco Alarcón, Luis Valdez, and Rudolfo Anaya.