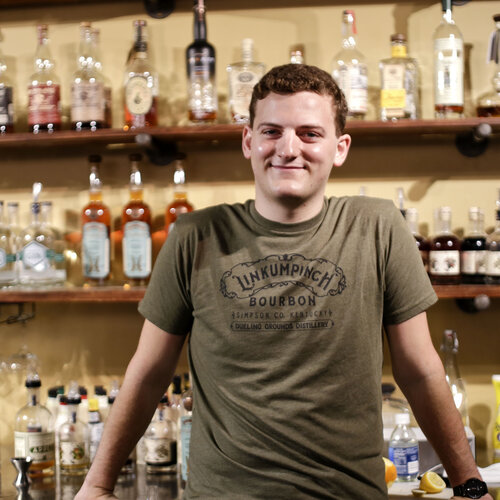 Dillon Miller graduated from WKU in May 2020. He received a BA in English, concentrating in Professional Writing with a minor in Entrepreneurship. He is currently enrolled in WKU’s Brewing and Distilling Arts and Sciences graduate certificate program. During the summer,

Miller began working at Dueling Grounds Distillery in a positional created for him. Once he

gains experience from this job, Miller’s goal is to find a more advanced-level position at a larger distillery.

Miller described his journey to his current position as “a long and winding road.” After two years as an English for Secondary Teachers major and a semester of Literature, Miller found his place in Professional Writing. He enjoyed the Professional Writing classes and decided then to follow a business-related career path. To learn more about business, he added an Entrepreneurship minor. Miller connected his major and minor by their shared goals of audience analysis and communication.

In the fall 2019 semester, Miller decided he wanted to work in the whiskey industry. Since he focused his studies in marketing, Miller felt confident advertising himself to employers. In the spring, he sent emails to the local distilleries telling them who he was, what he was doing at school, and what work he was interested in. Miller emphasized his passion for the industry and his willingness to take any opportunity available. Dueling Grounds’ response was the most promising, and Miller kept in contact with the owner. After around two months of emails and phone calls, Miller went to the distillery in-person to finalize the offer. The owner was impressed by his persistence and created a position for him that day.

“Don’t be afraid to reach out even if you think you’re not qualified or even if there’s not an open position,” Miller advised. He admitted the process was intimidating, but he reasoned that in the worst scenario, nothing would change. “Best case scenario,” he concluded, “I get hired for a job that doesn’t exist for something that I really want to do.” Ultimately, this decision worked in Miller’s favor.

At Dueling Grounds, Miller is exposed to all aspects of the distillery business. He manages customer service tasks such as giving tours, selling items, taking calls, and serving drinks. He helps with production through the distillery process, equipment operation, and bottling. In addition to these responsibilities, Miller is in charge of a social media campaign for the

Miller uses his Professional Writing skills for many aspects of his job. He explained that many different types of people come to the distillery for different reasons. For each person, Miller must “genuinely market and communicate a certain experience and tone that the distillery wants to represent.” He asserted, “Knowing what ideas to communicate to certain kinds of people—even though I may not be writing them down—is a Professional Writing skill.”

Miller is grateful for his Professional Writing classes, and he named the PW Capstone course as his greatest learning experience at WKU. Miller’s participation in the course helped him hone his writing and communication skills and encouraged him to set specific career goals. When asked what advice he had for students, Miller recommends students figure out what they are interested in and then look deeper into jobs of that field. Miller then advised, “Figure out where you can apply your skills to your interest.” He stated, “The skills that you learn in Professional Writing can be applied to anything if you find that niche.”