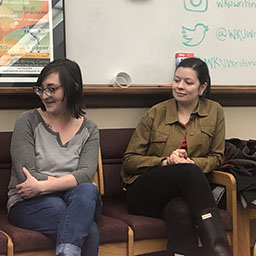 Kristen Darby and Jennifer Troth listen to a copanelist during the first Professional Writing Club meeting on Tuesday, February 4.

On Tuesday, February 4, 2020, a group of Western Kentucky University English alumni from
KirkpatrickPrice , a locally-based information security auditing firm, came to speak with WKU’s
Professional Writing Club. Alumni Sarah Slatton, Jennifer Troth, Kristen Darby, and Jessica
Barksdale all attended and advised the PW Club on how to create job opportunities from their
time at WKU.

“None of us went into college thinking, I’m [going to] be a tech writer for an information security
auditing firm,” Slatton said. “There are so many industries out there that you might not expect
that are in need of writers and good communicators, which is what we are.”
And KirkpatrickPrice’s wealth of writers and communicators extends well beyond the scope of
Slatton, Troth, Darby, and Barksdale; in fact, Slatton noted that the firm’s Director of
Professional Writing, Maggie Austin, was also a WKU alumna.

“She was in the first PW class, when the major first started, and she was able to get a job at KP
as the first writer there,” Slatton said. “We’ve all felt like we’ve really benefited from this program
so we want to give back to it a little bit and share our experiences.”
Barksdale also felt that her time as an English major has helped her navigate the territory of
working for an information security auditing firm.

“We all came from this department, which means we don’t know anything about information
security,” Barksdale said, “but as English majors we have learned about analysis, we’ve learned
to communicate clearly, so even if we don’t have a firm grasp on the subject matter, we know
how to break it down, analyze it, and make it come out in a way that other people understand.”
The presenters nodded in agreement with Barksdale, and all emphasized the importance of
learning to communicate effectively in professional positions. Barksdale reinforced her position
on thinking outside the box, and offered students ways to jumpstart this analytic thinking, right
from the classroom.

“Each assignment is an opportunity to learn something new and to approach something in a
different way,” Barksdale said. “My advice would be that even if there’s a standard assignment
that you’re doing, see if there is a way to approach it from a different angle. That kind of
adaptability is a really good skill to have.”

“Don’t just think of it as an assignment because I was really guilty of that,” Troth added. “Try to
use it to your advantage, like Jessica said, to really improve your skills and show what you can
do because this program does teach you a lot of useful information.”
Darby also felt that WKU is a good environment to gain work experience with relatively few
consequences before entering into the workforce, making students more appealing to
prospective employers.

“I’m one of those people who needs to practice something before I feel like I can do it well,”
Darby said. “The only way to prepare yourself for going out into the world after graduation is just
honing whatever writing skills you have, no matter what they are.”

Ultimately, finding out what you want to do and utilizing your college resources to do that is
tricky, especially in a field as open as English, and Slatton acknowledges this, encouraging
student writers to narrow their interests by selecting majors that complement fields they may
have interest in. Overall, though, Slatton provides the group with a piece of hope for the future.
“Every single industry needs writers,” Slatton said. “Even if they don’t know it yet.”
If you’d like to read about what other WKU English alumni are doing these days, check out our
WKU English Alumni Page .