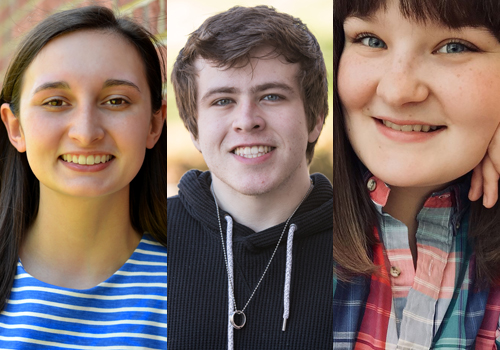 Two WKU students will study abroad in summer and fall 2019 with support from the Freeman Awards for Study in Asia (Freeman-ASIA).  Courtney Morgan of London and Jayden Thomas of Glasgow. Paige Wells of Georgetown has been designated an alternate and will be upgraded if additional funding becomes available.

The Freeman-ASIA program is designed to support undergraduates studying abroad in east or southeast Asia and promote understanding of Asia and its peoples and cultures.  Award recipients will share their study abroad experiences with others at WKU or in their home communities.

Courtney Morgan, a second-year student majoring in economics, marketing, and Chinese, is the daughter of Shellean and Paul Green. She will participate in the International Chinese Language Program at National Taiwan University this summer. She is a member the Department of Defense-funded Chinese Flagship Program, an intensive language program designed to develop students’ proficiency to a professional level of fluency. Courtney plans to pursue a career in product management, using her intercultural and language proficiencies to tailor products to Chinese and Taiwanese consumers.

Jayden Thomas, a second-year student in international affairs and political science, is the son of Tammy Thomas. He will study at Kansai Gaidai University in Osaka, Japan in fall 2019. He was recently awarded a U.S. Department of State Critical Language Scholarship to study Japanese intensively in summer 2019 as well as a Benjamin A. Gilman International Scholarship to fund his Kansai Gaidai program. He plans to pursue a career as a political officer in the U.S. Department of State.

Paige Wells, a second-year student in international business and finance, is the daughter of Wendy and Christopher Wells. She will study at Kansai Gaidai University in Osaka, Japan in fall 2019. She plans to pursue a career in a multinational company in the United States or abroad.

Each student worked with Melinda Grimsley, coordinator of international scholarships in the Office of Scholar Development at WKU, in preparing their Freeman-ASIA applications and with advisors in the Office of Study Abroad and Global Learning in choosing a study abroad program that best fit their academic and career goals.

About the Chinese Flagship Program: WKU’s federally funded Chinese Flagship Pilot Program is actively redefining the paradigm in language education.  The program is designed to bring talented students who start with no knowledge of Chinese up to the Superior level (ACTFL scale) of proficiency by the time they graduate from college by integrating Chinese language instruction at every stage of the undergraduate educational path and incorporating a capstone year at Nanjing University and working in a professional internship.

The Importance of Philanthropy