Congratulations to our 2019 Folk Studies & Anthropology Grads and Award Winners! 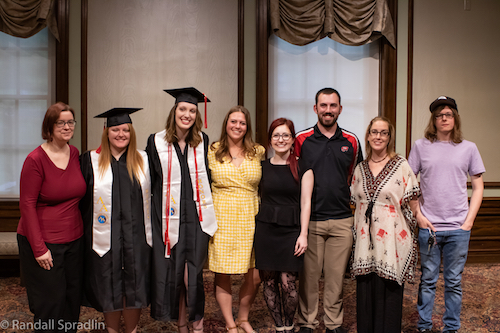 On May 10th the Department of Folk Studies & Anthropology celebrated our graduates with an awards and hooding ceremony and reception at the Kentucky Museum. Degree recipients included BA's in Anthropology (December '18 and May-August '19) and MA's in Folk Studies (May '19). We are proud of all our graduates, who are going on to further graduate study or to careers in fields including museums, education, and industry.

We would especially like to congratulate our 2019 award winners:

Eleanor Miller completed her MA in Folk Studies with a concentration in Historic Preservation. She completed three internships while in our program: with Local Learning, which works nationally to promote folklore and education initiatives; with the Historic Preservation Coordinator of Bardstown on the creation of a city archive; and with Pine Mountain Settlement School, working on K-12 Environmental Education curriculum. She served as a graduate assistant in the Education Department at the Kentucky Museum and served as the PCAL student representative on the Graduate Council, among her many accomplishments.

Hannah Banks is a Folklore minor and an Anthropology major with concentrations in cultural resource management and biological anthropology. She will be graduating in December 2019, and is currently in the process of submitting an application to the Masters program in Folk Studies at WKU. She is interested in working with the intersection of folklore and medicine, and working to develop culturally responsive health programs within multicultural communities. This summer she is studying in Mongolia with Dr. Houle.

The Outstanding Senior Anthropology Student Award goes to Ashley Gilliam. Ashley completed the cultural anthropology concentration and was very active in our department, serving as vice president of the Anthropology Club, working as an undergraduate research assistant in the department’s Ethnographic Visual Production Lab, and demonstrating pump drills at the Living Archaeology Weekend public outreach event. A graduate of the Honors College, she recently defended her thesis on how white-identifying populations in the UK and US view Muslims, work that she has presented at local, state, and national conferences. Ashley will begin a Master’s program in psychology at Brandeis University in the fall, and she plans to pursue a doctoral degree in anthropology, human evolutionary biology, human development, or psychology thereafter.

The Outstanding Anthropology Graduate in the Archaeology Concentration Award recipient is Jennifer Molchan. Jenn has made a big impact in our program since transferring to WKU in 2018. In addition to volunteering at Living Archaeology Weekend and on the UK Shell Midden Archaeological Project, she completed an archaeology field school in Mongolia and recently presented a paper on pastoralist lifeways in Mongolia at the WKU Student Research Conference. This semester Jenn completed a research project on prehistoric pottery composition in Kentucky, and she will undertake a similar project in Mongolian this summer with the support of a competitive grant from the American Center for Mongolian Studies. Jenn is applying to the archaeology program at the University of North Carolina-Chapel Hill.

The Outstanding Anthropology Graduate in the Biological Anthropology Concentration Award goes to Reilly Boone. A graduate of the Honors College, Reilly recently defended her honors thesis on the bog bodies of northern Europe. She volunteered at the Anthropology Lab, assisting with the curation of human skeletal remains. Reilly also participated in a number of archaeology projects, including completing a field school in Mongolia, volunteering at Living Archaeology Weekend, and assisting with a survey of the WKU McChesney Field Campus. This summer she will complete a field school at the storied Olduvai Gorge fossil human site in Tanzania, then apply for a position with the Americorps NCCC program doing disaster relief and response. Reilly plans to pursue a PhD in bioarchaeology.

The co-recipient of the Outstanding Anthropology Graduate in the Cultural Anthropology Concentration Award is Kelley Eads. An active member of the Anthropology Club who served as secretary, Kelley assisted Dr. Hudepohl with her local cemetery documentation project. She volunteered at the International Center of Bowling Green. Kelley studied abroad in Ireland and Northern Ireland last summer, and she worked as a student docent at the Kentucky Museum. She currently is applying for jobs related to equality and social justice, something Kelley feels is crucial to the non-profit work she wants to do in the future. Kelley also plans to pursue graduate work in cultural anthropology or museum studies in Seattle.

The co-recipient of the Outstanding Anthropology Graduate in the Cultural Anthropology Concentration Award is Elizabeth Thomas. Elizabeth received a FUSE grant to fund a research project on linguistic analysis of language used by lawyers, which she presented at the American Society of Criminology annual meeting. She was an active member of the Anthropology Club who volunteered at many department events such as recruitment fairs and the college fall festival. Elizabeth currently works as night auditor at a local hotel, and in the next year she plans to apply to graduate programs in cultural anthropology or criminology.

The Outstanding Anthropology Graduate in the Cultural Resource Management Concentration Award goes to JT Shanks. During his time at WKU, JT worked on an archaeology site monitoring program at Mammoth Cave National Park, serving informally as a team leader. He volunteered as a curatorial and collections management assistant at our Anthropology Lab, assisting with a collections condition assessment for the US Army Corps of Engineers. Since graduating in December, JT has been employed as an archaeology field technician for Wood Environment and Infrastructure.