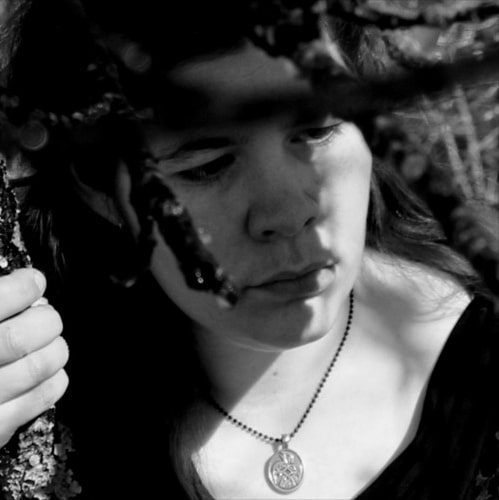 Katie Daniels, a senior in the English Department, recently wrote an original song based upon the novel Heart of Darkness. Katie took the time to answer a few questions about this song and about her life in music:

What is the song called, and what genre would you say it falls under?

The title of the song is “And I Burn.” I would probably consider it folk music, although it has a definite Gothic vibe going on. Sometimes singer/songwriter is considered a genre for stuff like this. Genres are finicky business.

What inspired you to create the song?

Heart of Darkness absolutely fascinates me. I’d intended to just skim it, but I got sucked into the story. I was absolutely fascinated by Kurtz, and especially the dilemma of the lure that power can have, even for individuals who starts out virtuous. When we read T.S. Eliot’s The Hollow Men in class and drew connections back to Guy Fawkes I knew that there was a song in it somewhere and was waiting to get home to fool around with it. Then I saw the news about Notre Dame.

I already had the metaphor of burning in mind when I thought about Kurtz. People like that, brilliant people, they burn too hot and too bright, like a meteor. That’s what the second verse in the song is supposed to be referring to. But burning can also be destructive. You burn too bright, too hot, and you burn out: like Kurtz and like Guy Fawkes. But the point of Eliot’s poem is that it’s better to burn than to be a stuffed man in a field. It’s better to be Guy Fawkes than his effigy. Notre Dame as a representation of France and Catholicism, both cultures that have been seen as “too much” for modern sensibilities, sort of represents that. So I included Ave Maria as the counterpoint as a nod to that.

How long have you been writing and playing music?

I’ve been playing piano since I was five, and I’ve been a professional harpist for twelve years. I started composing shortly after I learned harp. I usually write for harp and voice, or guitar and voice. “And I Burn” is among the handful of songs that I’ve written for and performed on piano. It’s also the most complex thing I’ve ever tried to record and mix and it shows in the recording.

Did you run into any difficulties while writing the song?

Coming up with a decent piano arrangement was hard, since that’s not my usual skill set. Recording it was a nightmare, since there are at least seven layers of audio and they all had to be recorded individually. When I write songs I tend to write them pretty quickly after I get the initial idea. I was stuck for about half an hour on the last verse, but that’s because I’d lost my grip on the metaphor and once I remembered what I was writing about it came easily.

I wrote the Ave Maria part first, and I knew that it needed to be sung over some kind of driving beat. Rather than just an instrumental track I wanted some kind of chanting. I was poised to start writing something, probably repetitive when the line “fire, fire burning bright” came to mind. Of course what I was thinking of was “tyger, tyger burning bright,” a poem we’d read in Dr. Davies class earlier. I looked up to see if it was suitable and it was. It’s religious in nature, which fits the theme of the song, but it also has metaphors of burning. If you use the tyger as a metaphor for the heart of me like Kurtz or Guy Fawkes then you find that the song is asking a very interesting question about the statement “heart of darkness.” If the heart of man is darkness, who made the heart?

What do you hope people will come away with after listening to this song?

Like many of the things that I write, this song asks more questions than it answers. If it accomplishes anything at all (it doesn’t have to) it would make people ponder the theme of both Heart of Darkness and The Hollow Men. My best friend hated Conrad’s novel, but she’s fascinated by this song. I think sometimes a fresh approach to a timeless theme can help people understand the older, denser works that preceded it.

You can listen to "And I Burn" here: https://soundcloud.com/katie-lynn-daniels/and-i-burn

If you want to listen to more of Katie's works, you can find them here: https://soundcloud.com/katie-lynn-daniels