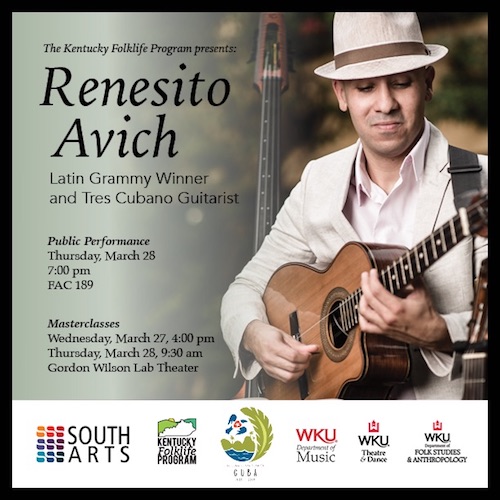 The Kentucky Folklife Program, part of the Department of Folk Studies and Anthropology, will be presenting Cuban Artist Renesito Avich on Wednesday and Thursday this week. Renesito Avich is a traditional Cuban musician who specializes in the Tres Cubano, or Tres, a traditional form of the guitar in Cuba. Two master classes will be held for students in the Gordon Wilson Lab Theater on Wednesday March 27th at 4:00 pm and again on Thursday March 28th at 9:30 am.  Renesito’s visit culminates with a public performance on Thursday March 28th at 7:00 pm in the Fine Arts Center Recital Hall Room 189.  The KFP wants to thank all its partners, South Arts, Office of International Programs, Departments of Music, Theatre and Dance, and Folk Studies and Anthropology for their financial contributions to help bring Renesito here this week.  This will be a swipable event. We look forward to experiencing his profound musicianship will you and your students!

More information about Renesito Avich and his residency at WKU:

Born in Santiago de Cuba, Avich was whistling by the age of three months, singing by six years old, and wanted to take percussion lessons by the age of nine. Renesito turned to the Tres at the age of 14, and was playing with some of the biggest names in Cuban traditional music by 15. In 2015, he moved to Sarasota, Florida to break into the American music scene. In 2016, he received a Latin Grammy Award for his work on the Flamenco Album of the Year, Niña Pastori’s Ámame Como Soy. In recent years, Renesito has been vibrant addition to the Folk Festival in Florida, and has also been active in an Artist Residency in Tallahassee. His compositions incorporate elements of classical music, jazz, and other genres.

As it is the national instrument of Cuba, the Tres has given rise to some of today’s most important musical patterns, with salsa the most famous of these. The instrument is similar in appearance to a traditional guitar, but has three courses of two steel strings. The configuration of the steel strings gives the Tres a strong, bright sound. The Tres is a quintessentially Cuban instrument that gives traditional Cuban music its iconic sound.

This artist’s residency is The Kentucky Folklife Program’s contribution to Western Kentucky University’s International Year of Cuba. The International Year Of Program seeks to provide the university and the surrounding community with a sense of interconnectedness through a year-long celebration of a single country. Throughout the year, the program enables a greater understanding of the country by engaging students and the community through visiting scholars and performers, campus and community events, cultural events, exhibits, and lectures. KFP looks forward to bringing Mr. Avich’s talent and knowledge to Bowling Green, as he will provide invaluable insight into the nation of Cuba and engage the student body and the greater community of Bowling Green.