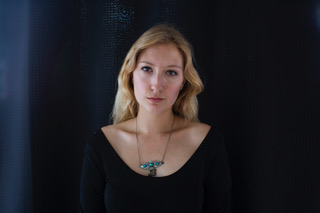 WKU senior Brittany Greeson of Owensboro is serving as a photojournalist for “Crossing the Divide,” a three-month cross country project to investigate and report on issues dividing America.

The GroundTruth Project, in collaboration with Boston public media producer WGBH, launched Crossing the Divide in late August. The trip will conclude in November.

The five Crossing the Divide Fellows are recent graduates or students of partner public universities, which will serve as home bases for the designated reporting regions during the trip: Western Massachusetts, Appalachia and Kentucky, the Twin Cities area of Minnesota, Western Montana and California’s Bay Area.

Greeson, a sociology major who expects to graduate next May, is an independent photographer based in Detroit, Michigan, working on a long-term essay about the Flint water crisis. She was named the national photojournalism champion in the 2016 Hearst Journalism Awards Program.

At each stop along the route, the fellows explore and report on the deep social, political and economic divisions in our nation.