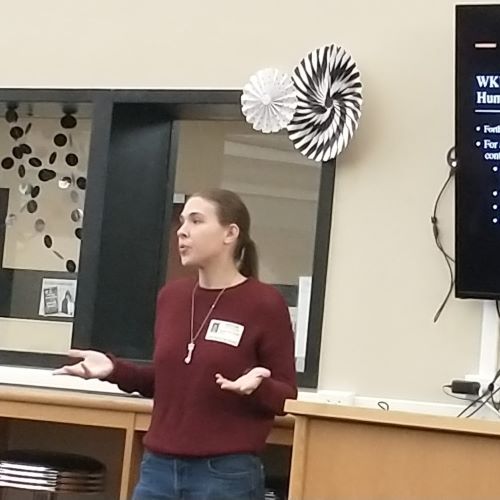 Kaylee ben Yosef, a senior of the WKU English Department, obtained a paid internship position at Franklin Precision Industry (FPI) as a translator for Japanese employees. Ben Yosef is a Creative Writing major and a Teaching English as a Second Language (TESL) minor local to Bowling Green. She has also studied Japanese at WKU with Instructor Paul Collins.

Ben Yosef first became interested in teaching English when Instructor Collins invited Dr. Alison Youngblood to speak to his class about the JET program and the TESL minor. Ben Yosef then switched her minor to TESL.

“I never thought I’d be a TESL minor because I tried the teaching thing already,” ben Yosef shared, referring to her time in the Elementary Education major. However, she realized, “Teaching English to someone who really needs to or wants to learn the language is giving them tools to be successful, especially in America. Being able to help [English language learners] with that is a large reason why I’ve been pursuing this almost full-time.”

Ben Yosef learned of the job opportunity in the summer when Instructor Collins emailed his Japanese students that FPI was looking to hire an intern translator. FPI is an automotive manufacturing company in Bowling Green that has many Japanese employees. Initially, ben Yosef was not interested in working within the automotive field, but she was drawn to the translating Japanese aspect. Her father encouraged her to welcome the experience. Ben Yosef then applied and was hired within two days.

Ben Yosef described what she thinks FPI saw in her as her “ability to mostly understand Japanese and to be a kind of English ambassador so that the American workers and the Japanese workers understand each other.”

In addition to attending company meetings, ben Yosef translates and provides clarifications for the Japanese employees in many life processes such as signing leases, renting cars, doctor appointments, and school enrollments. While most of the employees are fairly fluent in English, ben Yosef provides a native English speaker’s insights to help them communicate “what the other person wants them to say to get the outcome they want.”

Her role at FPI has led to ben Yosef offering one-on-one English tutoring when requested. Ben Yosef describes that there is a large pool of English language learners wanting tutoring in Bowling Green and that it’s hard for them to find tutors that aren’t overloaded with work. Thus, some employees at FPI have asked her to help their family members learn English and recommended her to their friends.

Her skills in the Japanese language have been invaluable to these pursuits because with some clients, Japanese is their only common language even if she is not fluent. “I’m working with kids who have just moved to America and know barely any English or with people who have lived their whole lives in Japan,” ben Yosef described. Their top priority, she said, was to learn basic conversational skills.

These experiences tutoring have also enriched ben Yosef’s language skills as the families are happy to teach her Japanese in return. She described how once she began learning Japanese, she very quickly formed a love for the language and culture that became “the missing piece of [her] life.” She hopes to visit Japan often in the future.

As an English tutor, ben Yosef started her TESL courses this semester with new eyes. In her first linguistics course, she felt confused and overwhelmed by the technical concepts and theories. She told this to her professor, and Dr. Trini Stickle collated a folder of background information, which encouraged ben Yosef to continue the minor. Ben Yosef described, “When I start to see those concepts and theories in motion on the field, they start clicking. I see that the teachers really are right.” Now, ben Yosef is motivated to learn in order to better reach the people she tutors and translates for, and she considers how to adapt classroom theories for the needs of the individuals.

Because of her position at FPI and what she has learned in TESL, ben Yosef is considering becoming a full-time Japanese-to-English or English-to-Japanese translator. Her greatest long-term goal is to work as a translator for Nintendo of America. For the time being, she has fallen in love with Bowling Green and appreciates her many connections to the local Japanese community, so she would like to remain here and continue her current line of work.

After almost not applying for the FPI position, ben Yosef now sees the importance of taking chances. She advised, “Don’t ever dismiss opportunities that fall in your lap. You never know what it could turn into.”