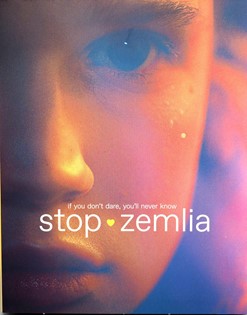 Released in 2021 by director Kateryna Gornostai, the coming-of-age film follows 16-year-old Masha as she navigates her relationships and emotions in high school. The event aimed to foster a deeper sympathy for youth in Ukraine through showing their way of life, which was widely lost when the country was struck by war.

“The hopes, dreams, and anxieties these young people express so rawly and vulnerably in the film feel like such a precious human thing, right before the unleashing of hell,” said Dr. Marla Zubel, who led a discussion of the film prior to the screening.

The event served as an opportunity to provide psychological support for Ukrainian youth affected by war, through accepting Donations to Voices of Children.

“I felt increasingly compelled to offer some sort of material support or aid to Ukrainians,” said WKU alum Caleb Peyman, who helped organize the event. “Drs. Marla Zubel, Dawn Hall, and Ted Hovet quickly jumped in to lend their support.”

The Gender & Women’s Studies program also played an important role in the event, according to Peyman.

“The film aligns with some of the goals of the program—showcasing the work of women and examining gender, sexuality, and social issues within art,” Peyman said.