Department of English Celebrates the Retirement of Dr. Ted Hovet 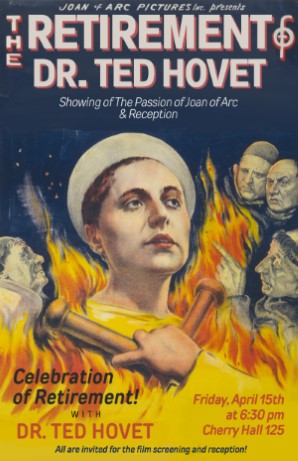 In coordination with Dr. Eric Reed, the Department of English held a retirement celebration for Dr. Ted Hovet on Friday, April 15. Dr. Hovet presented his favorite film, The Passion of Joan of Arc, and narrated parts of it with research and interesting facts about the film. Dr. Hovet’s friends, fellow faculty, and students gathered in Cherry Hall for the film screening and a reception afterward to celebrate his time at WKU.

The Passion of Joan of Arc is a 1928 French silent film directed by Carl Theodor Dreyer. Dr. Hovet described why he chose this film, stating, “I probably taught it as many times, if not more, than any film over my 27 years here at WKU, and I think it’s a lot of fun.”

Dr. Hovet first thanked those that organized the event for him, including Dr. Alison Langdon, Dr. Eric Reed, and Dr. Robert Hale. During the screening, Dr. Hovet pointed out details of the film that make it impactful to him, such as its score and unique camera shots. He has presented this film many times in his classes, but this was a particularly special moment.

Dr. Hovet has fond memories of sharing films that mean a lot to him with students and discovering new films from them as well. Working with colleagues has been another fulfilling facet of his career as a professor. “My favorite aspect of working with colleagues has been to collaboratively build new classes and opportunities in both English and film,” said Dr. Hovet. “What is especially rewarding is when I have been able to collaborate with colleagues who had once been my students and are now forging their own professional paths.”

After retirement, Dr. Hovet is looking forward to having more time to watch movies and being able to explore new opportunities. “What those opportunities are remains to be seen, and that is part of what makes it exciting,” said Dr. Hovet.