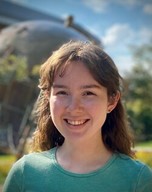 Zoe Ward, a WKU senior from Frankfort, Ky., was recently awarded acceptance into the Japan Exchange and Teaching (JET) Program. The JET program is a competitive employment opportunity that allows young professionals to work as Assistant Language Teachers in schools throughout Japan. It is a highly competitive program that selects only the best candidates to represent America in this position. Through this program, Zoe, who is a Spanish and Biology double major at WKU,  will have the opportunity to work alongside native Japanese speakers and teach students in Japan how to speak English.

Zoe learned about the JET Program through her Japanese 201 class in the fall 2022 semester, and she decided to pursue this exciting opportunity. She is  thankful for the Modern Languages Department and Mr. Paul Collins for making her aware of this opportunity, encouraging her to pursue her goals, and preparing her for future success.

Presently, Zoe does not know exactly where she will be placed in Japan or in what setting she will work. Regardless of where she is placed, she will be working as an assistant language teacher helping native Japanese English teachers to teach English. The JET Program values native English speakers’ perspectives in the process of learning English, and Zoe is excited for this opportunity to live abroad and improve her foreign language skills.

We are very proud of Zoe and all that she has accomplished. Acceptance into the JET program is a prestigious honor, and we know she well excel in this role.