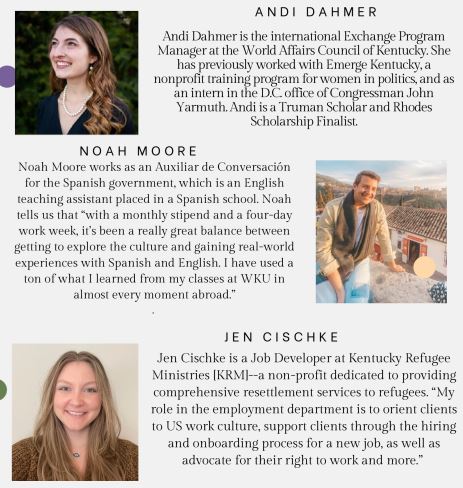 On Thursday, March 31, 2022, the WKU Spanish program organized an event on the power of Spanish after graduation and how it relates to students’ professional future and goals. During the meeting, Dr. Melissa Stewart directed the alumni panel, sparking conversation between the former Hilltoppers on their current experiences. The panel consisted of three alumni--Andi Dahmer, Noah Moore, and Jen Cischke—who were diverse in the experiences they brought to the discussion. However, the three speakers shared one thing in common: their interest and use of language in the professional world.

Andi Dahmer works with the International Exchange Program Manager at the World Affairs Council of Kentucky. Previously, she has had experiences with Emerge Kentucky, a nonprofit organization on political training, and as an intern in the D.C. Office of Congressman John Yarmuth. She is a Truman Scholar and a Rhodes Scholarship Finalist. She is planning to further her education soon. During the panel, she explained that her language at WKU was Spanish and that it has opened a wide array of opportunities for her. During the talk, she encouraged current students to find what sparks their passion to fill their time and to be open-minded when exploring new areas of inquiry or extracurricular activities.

Noah Moore studied both Spanish and Arabic at WKU. Currently, he is working as an Auxiliar de Conversación in Spain—therefore, he is an English teaching assistant within a Spanish school. On a daily basis, Noah uses his Spanish skills to find his way through Spain and uses his English to teach students. During the panel discussion, Moore explained that he helps teach a variety of subjects ranging from art to physical education. He is set to return to the United States this year and sees his future in education and teaching, for which he has gained a stronger appreciation due to this experience. Moore explained that his time abroad has given him a wider understanding of culture.

Jen Cischke also studied both Spanish and Arabic at WKU and was a recipient of the Critical Language Scholarship for Arabic. She is working as a Job Developer at Kentucky Refugee Ministries (KRM) which provides services to refugees during resettlement. Jen specifically helps immigrants obtain work, leading them through the entire process. She explains that both Spanish and Arabic provide a way of connecting with immigrants daily, and that she frequently uses both languages in her current work.

To learn more about WKU’s Modern Languages Department and what a language major or minor has to offer, visit our website.