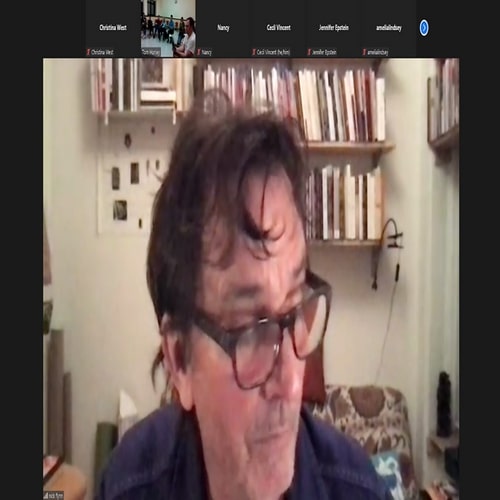 Flynn joined a two-session Zoom to read from his most recent volume of poetry, I Will Destroy You. He shared some of his unique ways of presenting and revising poetry, such as reading poems with his band, Killdeer. He also read some other poems that have impending publishing status and, according to Flynn, may never be released.

Flynn used a particular method for creating many of the poems he read. He would view a collage of three images and write a poem each day with that as inspiration. “The images would speak to each other, and then trying to translate what that meant for a poem was just a really interesting process,” said Flynn.

In the second session, Flynn read from his newest memoir, This is the Night Our House Will Catch Fire. Flynn revisits pieces from his childhood in this memoir, focusing on his life when he was seven years old. He described the recurring theme of one of his childhood houses on fire. “The house catching fire was something that has appeared in pretty much everything I've written. It's sort of this resonant image of my childhood,” said Flynn. “This book was the chance to look at what that fire meant.”

A Q&A followed each session, wherein Flynn notes some of what goes on behind the scenes of writing. “I really get a lot of joy out of writing, so I don't have to force myself to write,” Flynn stated. Flynn described how he researches for his memoirs, which includes referencing memories, finding documents, conducting interviews, and visiting places from childhood.