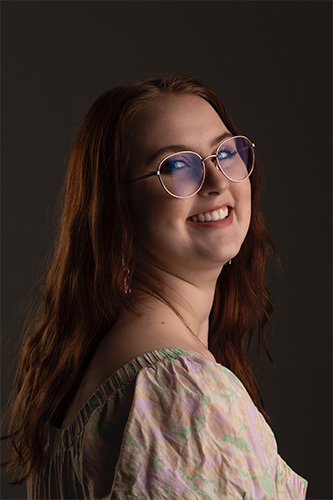 “I hope that at the end of the day I've done something that outlasts my existence at WKU.”

Little Women: The Broadway Musical is a musical adaptation of Louisa May Alcott’s novel by the same name. A collaboration between WKU Departments of Music and Theatre & Dance, this musical is a heartwarming coming-of-age story about the love between four sisters. Autumn Stolle, a Music major with a concentration in Vocal Performance, is portraying the eldest March sister, Meg. In her own words, Stolle describes Little Women as a “story centered around Jo March. It’s her trying to find her way in the world and decide how her passion fits into a society that's not quite ready for a woman that is such a strong character. It’s also really about her bond and childhood with her family, specifically her sisters.”

Stolle is no stranger to the stage at WKU. She was an ensemble member in Trial by Jury in 2019 and was set to serve in the ensemble in The Drowsy Chaperone in 2020, but, unfortunately, the show was canceled due to the pandemic. Last year, she played the 1st Knitter in A Game of Chance, and she believes that her theatre experiences at WKU have played an important role in her career post-graduation. WKU Music alumnus and Broadway performer, Bronson Norris Murphy, has been assisting the production as guest director. Stolle says that Murphy’s experience has been beneficial for knowing what life will be like as a professional performer.

“He’s been treating us with this rigor and with a mind of ‘this is what it's like to be a professional, these are the expectations that you’re expected to meet.’ He’s constantly told us that we’ve met and exceeded his expectations, which is really exciting. It's a lot of time to spend all together and a lot of time spent in one space working on something but in that sense the rigor has shown me what it would be like to be a professional singer or a professional actor.”

When asked about her favorite part of doing theatre at WKU, Stolle said that she values the sense of community among the cast above all else.

“This production has been such a breath of fresh air. We all get along so well, and I absolutely adore my counterparts who are playing Jo, Amy, and Beth. They’re all wonderful and the entire company is all so kind and encouraging. Coming together to create something for other people to watch bolsters you and makes the 18 hours a week of rehearsal worth it when you’re surrounded by so many wonderful people with one goal in mind. Every day it's like, ‘wow I can't wait to go to rehearsal!’ Even though I have a million things on my to-do list, I can't wait to go to rehearsal and see these absolutely wonderful people.”

Stolle believes that people should go see this play because it will mark an important moment for the arts in the COVID-19 pandemic.

“The arts and culture sector was one of the hardest hit sectors when COVID hit and being able to do this production is a really big deal, especially sans mask. This is my first time in 3 years doing a fully produced, staged, and costumed production. I think it would mean a lot for everybody in the cast for people to want to come and see us do this thing that we’ve waited for so long to be able to do. Please come and support this really wonderful production that we’re able to put on as were working our way through this pandemic.”

Along with doing music and theatre, Stolle has held multiple leadership positions during her time at WKU. She has been a TOP Guide since her freshman year and an active member of the PCAL Dean’s Council of Students (DCS) since her junior year. She also serves as the current President and former Vice President of the Student National Association of Teachers of Singing on campus.

After graduation, Stolle plans to spend a year working and doing internships at performing arts organizations before going back to school to receive a Masters in Arts Administration.

Performances of Little Women: The Broadway Musical will take place April 1-3 in Van Meter Hall. Tickets can be purchased in advance at wku.showare.com or at the door.