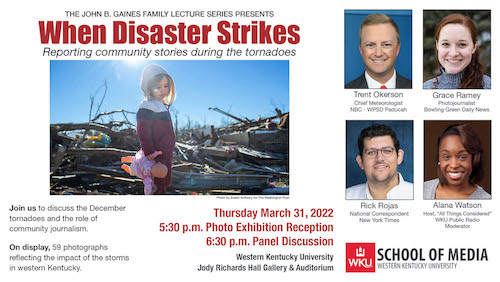 Everybody has a story to tell from the December tornadoes that struck western Kentucky. Area journalists began telling those stories before the tornadoes even touched down, and continue to bring to light the struggles people face while rebuilding from the storms.

Western Kentucky University’s School of Media, as part of The John B. Gaines Family Lecture Series, offers an evening looking back at the stories surrounding the December tornadoes and what was involved in sharing those stories with the journalists' communities.

The series includes a 5:30 p.m. opening for A Community United: Through Trauma and Grief, Resilience Emerges, an exhibit of 59 photographs documenting the impact of the tornadoes, taken by photographers throughout the region.

At 6:30 p.m., a panel of four journalists will discuss their experiences telling their communities' stories as the events unfolded. The panelists include meteorologist Trent Okerson of Paducah’s WPSD-TV, photojournalist Grace Ramey at the Bowling Green Daily News, and Rick Rojas, a national correspondent for The New York Times. WKU Public Radio host Alana Watson will moderate the discussion.

Grace Ramey, a photojournalist for the Bowling Green Daily News, recalled she had “never been so scared in my life” as the storm struck her neighborhood in Bowling Green. Ramey immediately went out into the darkness as emergency workers showed up searching for survivors in the rubble left behind. Ramey continues to tell the story of recovery for the Daily News as her community tries to rebuild. https://www.bgdailynews.com/news/slide-show-tornado-slams-bowling-green-area-during-catastrophic-outbreak-in-state/collection_74df2931-2425-5fff-ab18-9774c82b5aab.html

Paducah’s WPSD-NBC Chief Meteorologist Trent Okerson had been tracking the weather system days before it formed into the historic storm. That day he broadcast live as the storm made its way across the region, hitting his surrounding communities. https://www.youtube.com/watch?v=-kfoxBDLA7Q

Poynter Institute profiled Okerson and his team’s effort to save lives: https://www.poynter.org/reporting-editing/2021/meet-the-local-news-meteorologist-whose-forecast-saved-lives-in-kentucky/

Rick Rojas, a journalist and Nashville bureau chief for The New York Times, covers news throughout the south. Rojas began reporting from Mayfield the morning after the storm, helping to inform the national audience on the destruction left in its wake. Rojas continues to write for a national audience on our communities as they rebuild. https://www.nytimes.com/2021/12/17/insider/kentucky-tornado-reporting.html; https://www.nytimes.com/2022/01/25/us/tornadoes-kentucky.html

Alana Watson, Bowling Green’s local host for “All Things Considered” on WKU Public Radio, will act as the moderator for the evening as they discuss the events surrounding the tornado and the role of community journalist in telling the difficult stories in the community. https://www.wkyufm.org/people/alana-watson

If you need more information about the lecture series or want to connect with one of the panelists, contact organizer Jonathan Adams at jonathan.adams@wku.edu or (307) 733-6089.