A Non-traditional Road to WKU 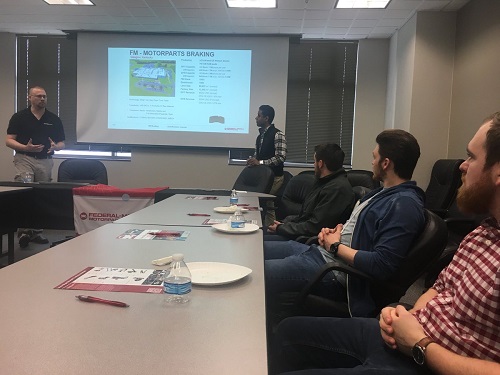 Mickey McClellan is a senior electrical engineering student from Glasgow, KY currently working with the Robotics Team, which he says has been pleasantly challenging. McClellan’s engineering story is unique because it began with his job.

McClellan has worked at Federal Mogul for several years; he began as a production worker but wanted to pursue professional development and advancement opportunities within the company. McClellan says he considered completing a maintenance apprenticeship but wanted something with more long-term opportunities for growth.

According to McClellan, his work at Federal Mogul doesn’t follow a typical-day pattern. One of his goals is to increase productivity by reducing waste. For an example, McClellan explained that the company is currently undergoing an expansion process, and a few of his roles are to analyze the incoming system, ensure compatibility with existing systems, and adjust systems to minimize waste. These adjustments will then be continuous after the new system is installed.

As the electrical engineer, McClellan has also been able to speak during a recent Industrial Partnership Showcase.

This job affected his decision to attend WKU. McClellan says that he chose to study engineering at the college because it is close to his home in Glasgow and because he was able to take many of his general education classes at the regional campus there. Also, taking classes at the regional campus allowed for an easy transition into the university experience, McClellan reports.

However, McClellan still nurtures his interest in computers, which developed in his childhood. During this time, McClellan says his family got its first computer, that he accidentally broke by inadvertently installing DOS, overwriting the computer’s existing operating files.

Not long after, McClellan broke his wrist and spent his sixth-grade summer fixing the machine with the help of manuals and friends’ advice. He spent these months also learning more about computers and electronics. He reports that taught himself electronics through projects from Radio Shack, particularly a radio building kit.

McClellan is excited to graduate in May and recently bought a 10-acre farm. He says he is happy with where he is at professionally, but remains open to new opportunities. He aspires to own his own research and development company to do military research and “come up with the next piece of tech to save soldiers’ lives.”

McClellan’s advice to other students is to “be proud of everything you do,” and he recommends that all engineers learn to program a computer.