About Us | Western Kentucky University Skip to main content 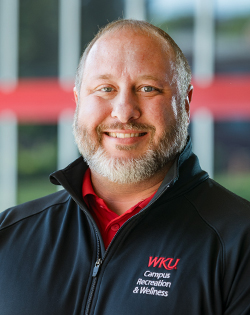 Justin joined WKU in September of 2021 as Director of Campus Recreation & Wellness. He graduated from the University of North Florida with a Bachelor’s degree in Education with a concentration in Sport Leadership in 2004 and graduated from the University of Arkansas with his Master’s degree in Recreation with a concentration in Sport Management in 2007. He began his career in collegiate recreation in 2002 as a student official in intramural sports while at UNF, then worked his way up to student supervisor, then received a graduate assistantship in intramural sports while at Arkansas. His professional career began at the University of North Florida, where he served as Intramural Coordinator, Assistant Director, and Associate Director for Campus Recreation over the course of ten years. He then moved on to Texas A&M University-Commerce as Senior Associate Director for Campus Recreation for four years.

He loves spending time with his wife Julie, sons Logan and Nathan, and his three Cocker Spaniel dogs: Walker, Ranger, and Oakley. He also loves going camping and exploring with his family in their travel trailer, affectionately named Big Tasty from their favorite TV show, The Goldbergs.