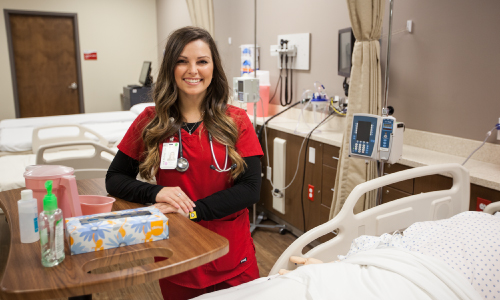 Bethany Moore, a senior in the School of Nursing and Allied Health (SONAH), was seeking a college experience that would allow her to make independent connections while maintaining her link with her home base. That home being just across the Kentucky border in Hendersonville, Tennessee.

“The number one reason I chose WKU was because of the nursing program. They are well known for preparing their students for a successful career, and WKU was close enough to my hometown, without being too close. The Hill felt like home,” Moore said.

As part of the nursing program curriculum, students participate in simulations that imitate real-life situations, allowing students to apply their skills and knowledge. Leaving room for error, the simulation labs offer scenarios for students to problem solve and safely make educated decisions for their patient.

Moore currently works in a hospital as a nursing intern and has already applied her knowledge to a real-life occurrence. “My patient at the hospital developed acute respiratory distress syndrome [a condition when fluid fills the air sacs in your lungs, lowering the amount of oxygen in your bloodstream]. We had just completed a simulation with the same scenario a week before. So, I was able to apply my knowledge and skills and feel confident in contributing to the care of the patient,” Moore said.

Reflecting on her time at WKU, Moore feels that her collective involvement on campus has shaped her future. Although she will graduate from her second baccalaureate program, a Bachelor of Science in Nursing in December, Moore previously earned a Bachelor of Science in Public Health Education in May 2016 at WKU. She spent much of her time during her first degree program as part of the WKU All-Girl Cheerleading Squad.

“As a student-athlete, I’ve developed time-management and leadership skills that have carried over into my success as a nursing student. The School of Nursing has helped strengthen those skills, plus helped me to develop a sense of professionalism that I will need to build my career.”

Currently, Moore serves as a member of both the Kentucky Association of Nursing Students (KANS) and WKU chapter of the Nurses Christian Fellowship.

As Bethany Moore prepares for the end of this chapter in her life, she is most thankful for the “life-long friendships” that she has made along the way. “Being a Hilltopper allows you to be a part of something bigger than yourself,” Moore explained.

Moore plans to return to her Tennessee roots after graduation to work as a registered nurse. Long term she hopes to continue her education, specializing in neonatal and pediatric care.

For more information on the WKU Nursing Program, visit www.wku.edu/nursing.