A brief history of the Gordon Ford College of Business 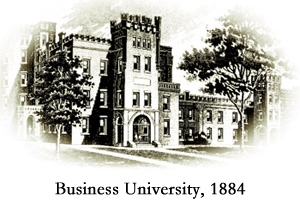 The Gordon Ford College of Business began as a small, private business school in Glasgow, Ky., in 1874. A decade later, rising enrollment caused founder A.W. Mell to search for a larger building to house what was known at the time as the Southern Normal School and Business College. Not finding suitable quarters in Glasgow, he moved the school to College Street in downtown Bowling Green. As Mell continued to pursue other interests, enrollment declined from approximately 600 to 28 students and he sold the school to brothers T.C. and H.H. Cherry in 1892.

The Cherry brothers added more teachers and embarked on a widespread advertising campaign that reached as far south as Mississippi and Louisiana. The advertising strategy worked and enrollment climbed quickly. The first catalog of the institution listed spelling, penmanship, bookkeeping, banking, and business correspondence as a few of its course offerings.

A few years after taking over the Southern Normal School, T.C. Cherry left to become superintendent of the Bowling Green City Schools and H.H. Cherry remained to conduct the daily affairs of the college. Disaster struck in the fall of 1899, when a fire destroyed the College Street building. Cherry was able to borrow space from the business district to continue studies. A new building was built, nicknamed "the towers" by students.

As the school continued to grow, Cherry fought to make the school a state-supported institution. The state finally agreed and in 1906, legislation was passed, making a portion of the school the State Normal School for Teachers. The business section was not a part of this action, and thus sold to J.S. Dickey, W.S. Ashby, and J.L. Harman, being named the Bowling Green Business University (BU).

BU garnered recognition as a premier school because, at the time, most state institutions did not offer business courses. In addition, BU recruited top-quality students and hired successful business people as its faculty. The majority of the faculty was comprised of lawyers, professional accountants, and successful business owners.

BU enjoyed a reputation for being a rigorous institution, admitting students from nearly every state in the Union and countries such as Saudi Arabia and Japan. For many years, the college was the only four-year privately-owned college in the field of business accredited by the National Association of Business Colleges. Organizations across the country came to BU every spring to hire its students, because BU students were renowned for their business expertise.

Ownership of BU was transferred to a nonprofit corporation in December 1960, changing its name to the Bowling Green College of Commerce. After losing enrollment and unable to raise enough money to sustain itself, the trustees of the nonprofit institution decided to work with Western State College President Kelly Thompson to merge the two schools. This was accomplished on June 1, 1963.

After receiving a $10.6 million gift from BU alumnus Gordon B. Ford, the college was renamed the Gordon Ford College of Business. It has enjoyed this name since December 1998.