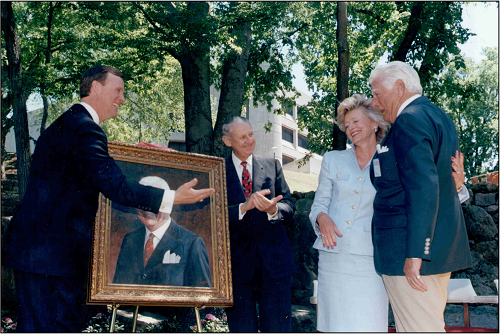 Glenda and Gordon Ford are congratulated during the dedication ceremony of the Gordon Ford College of Business in October 1998 by President Emeritus Gary A. Ransdell (far left) and Hays T. Watkins (middle).

About Gordon B. Ford:

During a golf match with WKU friends in early 1998, Louisville accountant Gordon B. Ford expressed an interest in giving money to the university's capital campaign. After a few more phone calls and luncheon meetings, Ford finalized his offer to WKU on a handwritten note: $10.6 million. The donation was the largest single gift in the school's history at that time.

"I just want to support the education at Western," he said. "I think education is the hope of the world. Unless they have a good education, they're not going to go very far."

Ford credits his mother, Mattie Newman Ford, for instilling the importance of education within him. Mrs. Ford earned her teaching certificate from Western in 1909.

The gift was given to the business school in December 1998, inspiring a name change for the school: The Gordon Ford College of Business. The gift also established the Gordon Ford Dean's Fund for Excellence. Previous donations from Ford launched the Mattie Newman Ford Professor of Entrepreneurship in the College and provided numerous scholarships for worthy students.

Ford's vision with his donation was to help the business college prepare leaders for the future workplace.

A native of Greenville, Ky., Ford graduated from Greenville High School in 1930, and from the Bowling Green Business University in 1934. He was a founder and managing partner in the Louisville accounting firm of Yeager, Ford & Warren. That firm merged with Coopers & Lybrand in 1970 and again with Price Waterhouse in 1998 to become PricewaterhouseCoopers. Ford retired as the managing partner of that firm, splitting his time between Louisville and Village of Golf, Fla.

Ford died in 2005, leaving a lasting legacy of philanthropy at WKU. He is survived by his wife of 30 years, Glenda, three children, and several grandchildren and great-grandchildren. 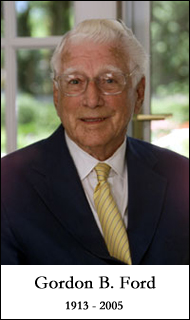