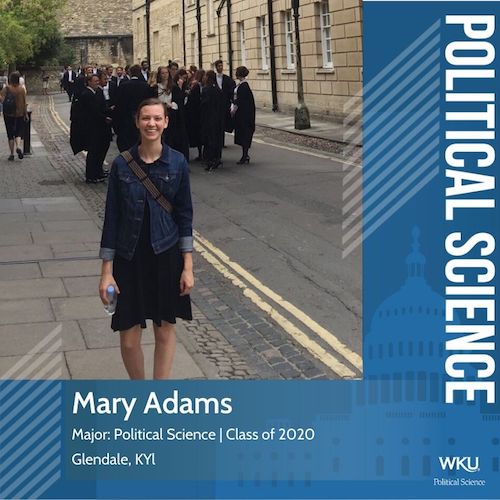 Mary Adams is a political science and communications major at WKU from Glendale, KY, and will graduate in the spring of 2020. Adams has taken advantage of several opportunities offered by the Department of Political Science, including an internship with the Barren River Area Development District (BRADD) and a Faculty Undergraduate Student Engagement (FUSE) grant to complete research on constituent service and representation.

Adams has started work on her master’s degree in public administration through the MPA JUMP program. The MPA JUMP program allows students to complete a master’s degree in an accelerated time frame by allowing students to count graduate hours toward the completion of their undergraduate and graduate programs. Complementing her interest in policy and public administration, Adams began her internship with BRADD as the Community Economic Development Intern. Through this internship, she focused on data collection and grant writing.

Adams was awarded a FUSE grant last spring to conduct research on constituent service and representation. Through this research, she has focused primarily on constituent attitudes toward legislators and congressional representation. She is using this FUSE grant to complete her honors thesis and will present research related to the project at the Symposium on Southern Politics at the Citadel.

Adams chose to major in political science because she believed the major would give her the skills to succeed in future endeavors. “I wanted to learn how to think well, write well, and reason well,” she said, “And these are skills I have gained through my time as a political science major.” After graduation, Adams plans to finish her master’s degree in public administration.