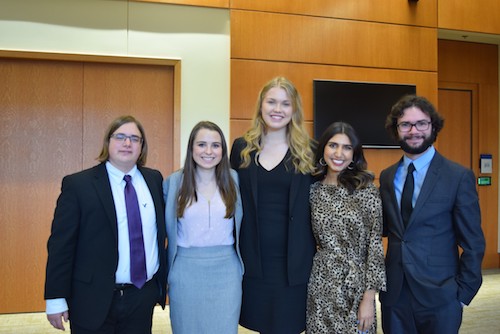 From October 17th through the 19th four WKU students, including Political Science majors Jacob Mcandrews and Josh Zaczek, attended the inaugural College Summit on Kentucky Pensions hosted by the Henry Clay Center for Statesmanship in Lexington, KY. The purpose of the summit was to foster bipartisan discussion about the state pension problem. The underfunding of Kentucky’s pension system has become one of the biggest issues in state politics over the last decade.

In addition to McAndrews and Zaczek, participants from WKU included Brady Crawford, a Business Data Analytics major from Elizabethtown and Hope Rowlett, a Finance major from Bowling Green.

The WKU team's initial policy recommendations were recognized as the best preparatory policy memo of the seven competing schools at the summit. Over the course of the conference, students from different schools were paired into four different working groups. The WKU students were paired with groups from the University of Kentucky and Transylvania University.

At the conference, the teams spent time working with PhD candidates from the Martin School of Public Policy and attended sessions hosted by policy experts in order to refine their policy recommendations. “It really makes you realize how huge some of these problems are,” said Josh Zaczek. “But, if you can break through the political barriers it's definitely solvable.”

Policy experts such as Aaron Ammerman from the Bluegrass Institute and Chris Tobe, author of the book Kentucky Fried Pensions, spoke to the recurring issues that have hampered the pension system for years. Poor investments, lack of transparency, and overly optimistic assumptions all contributed to the $40 billion liability the state is currently facing. “There’s clearly many things that have contributed to this issue,” said Jacob McAndrews. “Addressing the pension crisis means evaluating the system at all levels, there isn’t one silver bullet.”

After refining their proposals, each team presented to a panel of judges including representatives from the League of Women Voters, the AARP, the financial advising industry, and the state’s pension board. The working group comprised of WKU students Jacob McAndrews and Josh Zaczek alongside UK students Mikayla Mitchell, Madison Kasper, and Bushra Bani-Salman were recognized by the panel for having the best overall policy proposal.