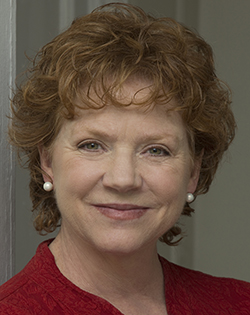 Becky Ann Baker is most recognized for her mothering skills, or lack thereof, on two
Judd Apatow series, Freaks and Geeks and Girls, where she plays creator Lena Dunham’s mom, and for which she received a 2017 Emmy nomination and two Critics Choice nominations.  But Becky has appeared on Broadway in both musicals and plays, including Good People, All My Sons, Assassins, Titanic, A Streetcar Named Desire, and The Best Little Whorehouse in Texas.

Her Off-Broadway credits include: The Hairy Ape at the Park Avenue Armory, Barbecue at the Public, Suddenly Last Summer for The Roundabout; Comedy of Errors, Othello and Two Gentlemen of Verona for New York Shakespeare Festival; Wonderful Town for City Center Encores; The Most Fabulous Story Ever Told for New York Theatre Workshop; Shanghai Moon and June Moon for Drama Dept.; Durang, Durang for Manhattan Theatre Club; To Whom It May Concern and Laura Dennis at the Signature; The Vagina Monologues at Westside Arts; and more. Becky has performed regionally at the Williamstown Theatre Festival, where she is an artistic associate, the Old Globe, the South Coast Rep, Arena Stage, the Cincinnati Playhouse in the Park, the Shakespeare Theater of New Jersey and the Goodman Theater in Chicago.