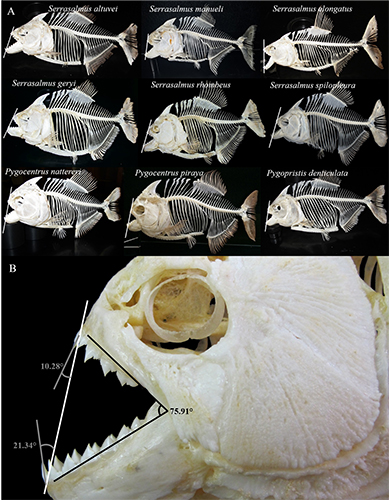 Illustration from Piranha Predation Could Not Have Driven the Evolution of Arapaima gigas Scales.

Piranha Predation Could Not Have Driven the Evolution of Arapaima gigas Scales was published in the December 2020 issue of Matter. Dr. Huskey co-authored the paper with Mark Westneat of the University of Chicago and Justin Grubich of the Field Museum of Natural History in Chicago.

Despite the notion from other researchers that Arapaima gigas evolved specialized scales to resist piranha predation, Dr. Huskey’s group refuted the idea that piranhas have affected the evolution of Arapaima scale morphology or function. The evidence, they wrote, supports the opposite hypothesis, that piranha predation has had no effect on Arapaima scale evolution or function. First, Arapaima evolved tens of millions of years before the earliest piranha-ancestor even existed. Their scales are for protection from giant caiman-ancestors. Second, piranhas are small fish that could never get their jaws around an Arapaima. Third, piranhas eat mostly other fish fins, not giant fish that could easily swallow them whole. And the list goes on.

“The beauty of science is that it is self-correcting. If someone puts forth a hypothesis full of scientific holes and untruths, the rest of the scientific community quickly ‘sinks their teeth’ into it and fixes it,” said Dr. Huskey, a functional morphologist who studies the feeding mechanisms and feeding habits of fish, among other things. “The story perpetuated by these other researchers is complete hogwash and, after a decade of being spread, it needed to be fixed.”