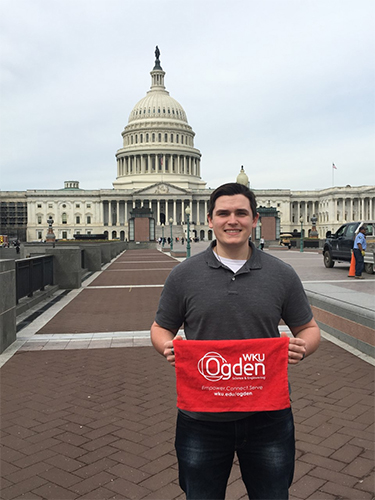 The senior from Versailles has been researching the lowering of carbon emissions for cement and concrete since the manufacturing and production of Portland cement produces 8 percent of all carbon emissions.

“I stumbled upon the longevity of Roman concrete,” Iglehart said. “Modern concrete has an average lifespan of a hundred years, but Roman Era concrete has lasted thousands of years.”

In his paper, Iglehart discusses the process and makeup of cement developed in the Roman era and the importance of further research.

Iglehart also noted the creation of cement hasn't changed much in the past few thousand years, but the main component is the kiln. Modern kilns operate at approximately 1,450 degrees Celsius, and Roman kilns operated at 900 degrees Celsius. “This massive decrease in temperature could reduce modern carbon emissions, and with the volcanic ash, the concrete could be more waterproof,” he said. “The main issue with Roman concrete is that their concrete took 180 days to fully set up, and modern concrete takes 28 days. A combination for both modern and Roman concrete could be a major benefit and breakthrough for the environment and the concrete industry.”